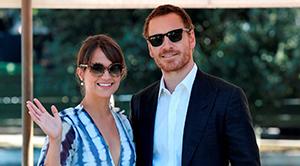 It’s a big weekend for Alicia Vikander and Michael Fassbender.

If the rumours are to be believed, they are officially married! And judging by these pictures, it looks like their rehearsal dinner was a party and a half. The A-list couple, who have been together since 2014, reportedly exchanged vows on Saturday  in Ibiza.

On Friday night, they were pictured enjoying a no expense spared party at an exclusive island beach bar for their non-traditional rehearsal dinner, which comprised of sunset photoshoots, arrival via speedboat and a very relaxed dress code. Our kind of party.

Fassbender, from Co Kerry, was pictured enjoying the festivities with his mother Adele and sister Catherine, while Oscar-winner Vikander was appropriately wearing an all-white billowy lace dress (with adorable heart shaped sunglasses) as she exited the venue separately from her husband-to-be.

Details of the ceremony are scarce as the couple managed to keep everything but the date top secret. “Guests have been told to arrive in Ibiza on a certain date and they will then be collected and taken to the hotel. He’s splashing out big time and it’s going to be the party of the year,” sources told the New York Post.

Similarly, Grazia said they were going to extraordinary lengths to ensure their day is kept away from prying eyes. “Michael is so privacy-conscious that even guests don’t know exactly what the plan is, they’ve just been told when to arrive on the island. He’s paying for them all to stay in the same five-star resort, but hasn’t revealed which one for fear of the exact location getting out,” an insider told the mag.

Unlike most couples who get to enjoy a few days off for last minute preparation in the run-up to their big day, it was all business up to Friday. On Monday, they touched down in Los Angeles for a brief pit-stop after promoting their respective work in Paris, London and Spain.

Last year, they gave a joint interview to Entertainment Weekly discussing their movie and clearly explained their decision not to play into tabloid culture with their relationship. “I’m not going to talk about my private life with a total stranger, unless I feel like I need to. Why would I? I don’t,” Fassbender said.

As for falling in love off-screen, the actors said it was a natural process and their attraction to one another was immediate.

“It wasn’t the first time in a movie either of us had played somebody who is falling in love. There is an element of separation there. If I’m playing a murderer, I don’t go out and start murdering people,” he added.

Vikander echoed his statements, saying: “I think we’ve made a clear statement that we keep certain things just between us. It was very easy to unite, but that’s quite personal.”