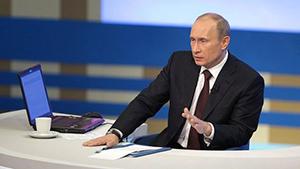 “Unfortunately, we see that the attempts to limit the direct contacts and communication among lawmakers have been made more and more often recently, I mean the practice of imposition of discriminatory restrictions and sanction lists, which often include lawmakers. We regard this practice as inadmissible, harmful and just foolish,” Putin said.

Both the system of international law and the culture of interstate dialogue have been eroded, he said.

“The parliaments all around the world, as the representatives of the people’s will, play a landmark, important, sometimes a major role in the elaboration of national development models and, of course, in the search of adequate responses to the modern challenges and threats that are common to us all. I attribute to them [challenges and threats] the erosion of international law and the culture of interstate dialogue among them.”

“We [Russia] will steadily follow the path toward the development of democratic, representative institutions, to increase the authority and the importance of the judiciary,” Putin said.

Fight Against Terror in Syria

When commenting on the Russian operation in Syria, the Russian president has reiterated his call for creating a united front against terrorism.

The fight against terrorism should be conducted wihout resorting to double standards and use of radicals, Putin said.

“We are confident that it is necessary to fight against terrorism without double standards, without hidden agendas, without the use of radicals for anyone’s political interests and, of course, only by joining hands, only together,” he said.

He said that attempts to interfere in internal affairs of other countries bring “chaos” in the Middle East and provoke the rise of a terror threat.

“There are no and could not be patterns of development in the modern world. Every state has its natural and incontestable right to define its fate on its own, as it is formalized in the UN Charter. Attempts to interfere in the life of sovereign states without understanding and taking into consideration the national features lead only to chaos. Such ill-considered foreign interference has resulted in the destabilization of the situation in the Middle East and North Africa, in the escalation of tensions in the region and the growth of terrorist threat,” he said.

The international community should think about the after-war reconstruction of Syria and the amount of assistance to the crisis-torn state, Putin said.