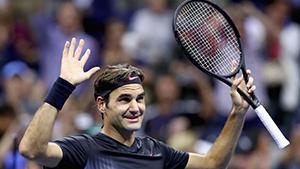 Roger Federer delivered a masterclass to beat Rafael Nadal in the final of the Shanghai Masters.

Federer took just one hour and 12 minutes to record a dominant 6-4 6-3 victory against the world number one to secure his sixth title of the year.

The 36-year-old broke Nadal’s serve in the opening game of the final and never looked back to claim his fourth victory over his rival in as many matches this season.

Federer was made to work for his place in Sunday’s showpiece after coming through a tough test against Argentina’s Juan Martin del Potro in the semi-finals.

But there were no such problems for the world number two against Nadal and his early break set the tone for a crushing win.

Federer secured his early service hold with three aces and an unreturned serve before winning the opening set in 35 minutes.

The Swiss then broke in the fifth game of the second set after Nadal pushed a backhand wide.

Federer, the 19-time slam champion, held to love in the ensuing game before sealing his 94th career title with his third break of the match.

“I played a great match today with hardly any mistakes,” said Federer, who has now secured five consecutive victories against Nadal for the first time in their long-standing rivalry. “It was very clear for me how I had to play and I was able to do it for the one hour and 12 minutes that I was out there.

“I started perfectly and kept the pressure on before creating more opportunities on the return, stayed on the offensive, and then also pull back at the right times to make sure Rafa could make some errors on his own and that is exactly what happened.”

Federer is the only man who can stop Nadal, a winner of this year’s French and US Open championships, from ending the season as world number one.

Speaking to Sky Sports, Federer added: “I am actually surprised that I have won here – with all that has happened since Montreal with my back – it is just nice to see that I am back again.

“London is my priority now and I really want to win the World Tour Finals. I am very excited to have had the year that I have had and everything that comes from here is a bonus.

“Finishing the year as world number one is a long shot, and I don’t think it will happen but if I play like this, who knows? Maybe I will get close again.”