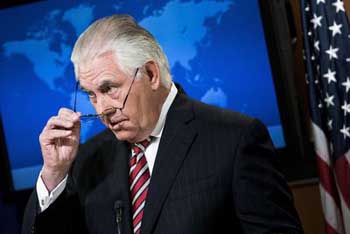 Tillerson’s comments on CNN’s “State of the Union” program on Sunday apparently weren’t meant literally as a timeline for war, as he preceded that quote by saying, “He has made it clear to me to continue my diplomatic efforts,” and that those efforts “will continue until the first bomb drops.”

Several times, Trump has said on Twitter that diplomacy with North Korea — including Tillerson’s own efforts — was futile, saying on Oct. 7 that “only one thing will work!” in dealing with North Korean leader Kim Jong Un’s ambitions for nuclear weapons capable of reaching the U.S. Two days earlier, Trump had said cryptically during a dinner with military leaders that observers were witnessing “the calm before the storm.”

“What Kim Jong Un should recognize is that if he thinks the development of this
nuclear capability is keeping him safer, it’s actually the opposite. It’s having the opposite effect,” McMaster said on “Fox News Sunday.”

— With assistance by Ben Brody, and David McLaughlin