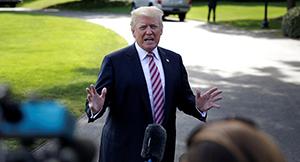 Perhaps it is his progress in fixing the North Korea crisis via Twitter, that has emboldened Donald Trump to choose now of all times, to ratchet up tensions with Tehran.

Trump’s derision of what he has previously called the “worst deal ever” is characteristically inconsistent.

Even the good bit. For example, balance his contemporary position on Iran against his contention that the crisis with Pyongyang should have been resolved before the rogue state had a nuclear capability. This makes sense. Yet Trump is blind to the argument’s obvious application to Iran – a country that was on the path to a nuclear capability but has agreed to stop, in exchange for sanctions being lifted, and its international bank accounts unfrozen.

While there are concerns over Iran’s behaviour (mostly outside the agreement’s purview, but not entirely), its nuclear retreat is a real-time, real-world example of how coordinated international pressure, coupled with a willingness to recognise legitimate, sovereign, defence and economic aims, can enhance global security.

While the Obama Administration was the locomotive force behind the 2015 agreement, it was a settlement between Tehran and the five permanent members of the United Nations Security Council – China, France, Britain, Russia and the US – with the European Union tagging along.

Thus, it is a multi-lateral instrument annexed to UN Security Council resolution 2231, the text of which welcomes inter alia diplomatic efforts by the five plus Iran “to reach a comprehensive, long-term and proper solution to the Iranian nuclear issue, culminating in the Joint Comprehensive Plan of Action [JCPOA]”.

It also notes explicitly “Iran’s reaffirmation in the JCPOA that it will under no circumstances ever seek, develop or acquire any nuclear weapons”.

Over the weekend, Trump threw that process into new uncertainty, by demanding that Congress and America’s allies introduce new tests for Iran’s compliance, including by dragging in elements outside the nuclear purview.

In so doing Trump has achieved the dysfunctional trifecta by: (i) putting the JCPOA deal at risk, and thus potentially increasing the prospect of Tehran’s return to a nuclear weapons path, (ii) showing contempt for America’s closest allies by demonstrating that he will act unilaterally against their interests at a whim, and (iii) signalling to North Korea, Iran, and any other adversary that there is little point in negotiating because even after a deal is made and complied with, the US can simply renege.