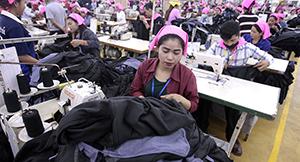 As Cambodia’s Ministry of Commerce declares that everything is business as usual with Washington, the increasingly heated rhetoric of Cambodian Prime Minister Hun Sen has been seen to be adding to a growing cooperation between Beijing and Phnom Penh.

Through the use of Phnom Penh’s state-run Fresh News media outlet, the Cambodian prime minister has upped his attacks on the US recently, accusing Washington of plotting his overthrow and of fomenting political unrest in the small tropical country.

The September arrest of Cambodian opposition leader Kem Sokha for treason was followed by accusations from Fresh News that Washington was funding a coup to overthrow Hun Sen’s ruling Cambodian People’s Party, prompting criticism from governments and human rights groups, and the imposition of visa restrictions on senior Cambodian foreign ministry officials, according to the South China Morning Post (SCMP).

As the diplomatic argument plays out, Phnom Penh and Washington nonetheless enjoy a healthy commerce in the form of both trade and tourism, as business between the two topped $3 billion in 2016, and an estimated quarter-million Americans made the country a vacation destination last year.

Almost a quarter of goods made for export in Cambodia went to the US in 2016, the latter becoming the second-largest importer of garments from Phnom Penh after the European Union, cited by SCMP.

Chinese business, ready to step in to take their share of the growing market, now record that investments by Beijing in Cambodia mushroomed some $200 million in 2016, to $4.8 billion, topping US trade and revealing China to be Cambodia’s biggest investor.

Beijing’s blooming investment in the nation has been suggested, in part, to be the result of a marked absence of human-rights regulations in Cambodian manufacturing facilities, a stipulation that US companies are at least required to acknowledge.

“With respect to human rights [in Cambodia and China], we’re dealing with Dr Evil and Mini-Me,” Ear remarked, adding, “China doesn’t want a mirror held to its face when it comes to human rights.”

Hun Sen’s government has smoothed the way for Chinese companies to receive favored-nation trading status, including the sale of some 20 percent of Cambodia’s lush tropical coastline for development. Human rights groups have reported that Chinese resort development firms — following the acceptance of their lucrative real estate bids — have forced evictions of locals at gunpoint.

China is also investing heavily in Cambodia in the form of military equipment and logistics, including uniforms, vehicles, loans, and a recently-constructed training facility in the south of the country, in exchange for Phnom Penh’s support for Beijing’s hotly-disputed territory grabs in the South China Sea.

In Phnom Penh, Chinese construction is ubiquitous, while in the more rural mountainous areas Beijing-based companies are deeply rooted in mining, hydropower and other large-scale infrastructure logistics.

Some 70 percent of all industrial investment into Cambodia between 2011-2015 was provided by Chinese financial and manufacturing entities — about $5 billion.

“For a small country, Cambodia garners a disproportionate amount of China’s attention,” Ear stated, according to SCMP.

Cambodia “has sold itself as an outpost of China down to promoting a Khmer-language version of [current Chinese President] Xi Jinping’s governance book and learning about the judiciary from China, as well as praising Xi’s anti-corruption program,” he added.

Washington has denied any involvement in actions to unseat Hun Sen or his ruling party, and regional observers have noted very little change in US investment in the country of approximately 16,000,000.

“I think for the business mindset, people do not get scared by [political tensions]. There are many factors that keep them here and assure that the situation will not be getting worse,” stated Phnom Penh foreign ministry spokesperson Soeung Sophary, cited by SCMP.