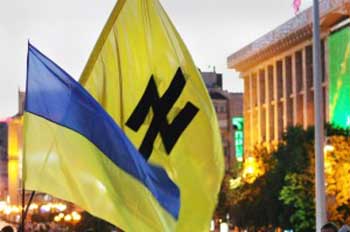 Exclusive: In the U.S., Russia-hating liberals are joining the neocons in seeking more war in Ukraine, as the prospects for a rational and peaceful resolution to the crisis continue to fade, explains James W. Carden.

Last January, Sen. John McCain led a delegation along with his longtime sidekick, Sen. Lindsey Graham, to a contingent of Ukrainian troops not far from the front line in eastern Ukraine. In the presence of Ukrainian President Petro Poroshenko, Graham told the soldiers: “Your fight is our fight … 2017 will be the year of offense. All of us will go back to Washington and we will push the case against Russia.”

McCain promised the assembled troops, “we will do everything we can to provide you with what you need to win.”

When contemplating the long careers of the two Republican senators, it is hard to escape the conclusion that McGeorge Bundy’s quip about the famed Cold War columnist Joe Alsop – that he had “never known him to go to any area where blood could be spilled that he didn’t come back and say more blood” – applies equally to McCain and Graham.

Indeed, last month’s National Defense Authorization Act shows that – if nothing else – McCain and Graham are as good as their word: the recently passed defense appropriations bill provides for $500 million, including “defensive lethal assistance” to Kiev, as part of a $640 billion overall spending package.

The aid comes at a good time for the embattled Ukrainian President Poroshenko, whose approval rating hovers around 16 percent. In a bid to stave off the possibility of a far-right coup d’etat, Poroshenko is back to banging the war drums, promising, well, more blood.

In a little covered speech at the U.S. Military Academy at West Point on Sept. 19, Poroshenko promised that “American weapons will help us liberate the Donbas and return Ukrainian territories.” He also noted that Ukraine spends roughly 6 percent of its GDP on defense, “a figure,” he observed, “much bigger than the obligation for the NATO members.”

Clearly Washington’s condemnation of governments that wage war “against their own people” remains selective, contingent upon who is doing the killing and who is doing the dying. In this case, it would seem that Russian-speaking Ukrainians simply don’t rate.

In addition to promising a wider war in the Donbas, Poroshenko has repeatedly promised that he will seek NATO membership. In August, during a visit by U.S. Defense Secretary James Mattis, Poroshenko declared: “Our Ukrainian caravan is on a roll and we have one road to travel upon — a wide Euro-Atlantic highway, leading to membership in the European Union and NATO.”

There are a number of objections to yet another round of NATO expansion. As I reported in February 2015: “The current [Ukrainian] government has, according to organizations that could hardly be described as Kremlin friendly (Human Rights Watch, Amnesty International, the Organization for Security and Cooperation in Europe), committed war crimes in its attempt to defeat the Russian-backed separatists in the Donbas. … NATO’s principal consideration should not be whether NATO will make Ukraine more secure, but whether Ukraine will make NATO more secure. The answer is self-evident.”

It is true that NATO Secretary General Jens Stoltenberg, as recently as this month, insisted to Russian state media that NATO is not contemplating Ukrainian membership, telling Sputnik that “There is no MAP [membership action plan] on the agenda.” Yet Stoltenberg has also said, as he did in a speech to the Ukrainian parliament in July, that he believes Ukraine “has the right to choose its own security arrangements” further noting that “last month, NATO welcomed Montenegro as the 29th member of our Alliance. This shows that NATO’s door remains open.”

So the issue doesn’t seem to be going away.

Poroshenko’s push to join NATO, which is being made against the backdrop of ever-worsening relations between the U.S. and Russia, ignores, perhaps purposefully, one of the principal causes of the morass in which Kiev and Moscow find themselves. It was Moscow’s not unfounded fear that Ukraine might join NATO that helped spark the Ukrainian crisis in early 2014.

In the weeks prior to Russia’s annexation of Crimea (and just over a month before the outbreak of full hostilities in the Donbas), three former presidents of Ukraine (Leonid Kravchuk, Leonid Kuchma and Viktor Yushchenko) called on the post-Maidan regime to renounce the 2010 Kharkiv agreement which allowed for Russia to base its Black Sea naval fleet in Crimea (in return for discounted prices on Russian natural gas).

It is perhaps not unreasonable that this last move, in addition to the foreign policy and security protocols embedded within the European Union Association agreement (which Poroshenko signed in June 2014), would cause the Russian government to at the very least suspect that NATO was setting the stage for Ukraine’s eventual absorption into the alliance.

Indeed, Kiev’s launch of its violent and indiscriminate “Anti-Terrorist Operation” against the Donbas – with the effect of intimidating and alienating otherwise loyal Russian-speaking citizens in the eastern part of the country – surely played a role in the Kremlin’s decision to come to the aid of the rebels later in the summer of 2014 and again at Debaltseve early the following year.

One reasonable alternative to NATO membership would be a treaty along the lines of the 1955 Austrian State Treaty, which was an agreement reached between the four post-World War II occupying powers (U.S., USSR, Great Britain and France) that granted Austria its independence “with the understanding,” according to the U.S. State Department, “that the newly independent state of Austria would declare its neutrality, creating a buffer zone between the East and the West,” meaning it would join neither NATO nor the Soviet-run Warsaw Pact.

Charles Bohlen, the legendary American diplomat who served as ambassador to Moscow from 1953-57, recalled in his memoir Witness To History that, with regard to the Austrian State Treaty, he believed “that the Kremlin leaders, and probably the Soviet military chiefs, decided that a genuinely neutral Austria was of more value to Soviet Russia than the maintenance of a divided country where the Red Army would occupy only the poorer half.”

The situation in postwar Austria – occupied by East and West – is not perfectly analogous to the situation that obtains in Ukraine today, but there seem to be lessons from what Bohlen intuited were the Kremlin’s motives that might be drawn upon to inform Western diplomacy.

But instead of trying to implement the Minsk peace agreement (which calls for the Donbas to remain as part of Ukraine but with more autonomy from Kiev) or search for a reasonable alternative to what are indeed perplexing and pressing matters of national security, Poroshenko has continued to ring the alarm over the another, this time illusory, Russian invasion.

In a recent speech before the Ukrainian parliament, Poroshenko claimed “there is more and more evidence for [Russia’s] preparations for an offensive war of continental proportions.”

Yet perhaps the danger isn’t as clear and present as Poroshenko portrayed it. As Mary Dejevesky of the U.K.’s Independent has observed: “Nato itself had held exercises in the Black Sea and before that in and around the western borderlands of Ukraine. Who, it has to be asked here, is threatening whom?”

Indeed, if Russia was on the precipice of launching a land war in Eastern Europe, would it have cut its defense budget by 25 percent to $48 billion a year, as was recently announced by the Kremlin?

As difficult as it might be for our hearty band on new cold warriors to believe (some of whom have scant knowledge about the topic of U.S.-Russia relations on which they so frequently choose to declaim), the push for a peaceable settlement in Ukraine is coming not from Washington, but from Moscow and Berlin.

Nevertheless, the stalemate continues: a resolution to the Ukrainian conflict – through the implementation of the Minsk agreements, as well as a settlement of the outstanding security concerns of all parties to the conflict – seems to remain tragically out of reach.