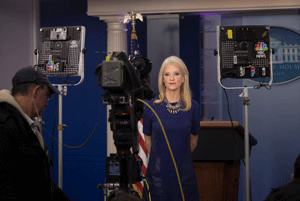 It’s your every fear come to life.

This “Saturday Night Live” sketch came straight out of a nightmare.

“SNL” turned Kellyanne Conway into the terrifying villain from Stephen King’s ‘It’ but, of course, with a spin. Kate McKinnon played Conway, or in this horror movie parody, Kellywise.

Poor CNN anchor Anderson Cooper, played by Alex Moffat, found the Kellywise creature hanging out in the sewer on a dark and stormy night, desperate to get on television again.

“Wait, don’t go! Don’t you want a quote?” Kellywise asked. “I’ll give you a quote. A crazy, crazy quote. How about this?

“OK, so, Puerto Rico actually was worse before hurricane Maria and the hurricane did actually blow some buildings back together. And I don’t know why Elizabeth Warren won’t tweet about that.”

Apparently Kellywise has been lurking down there for a while, luring unsuspecting reporters into her lair. She definitely got to MSNBC’s Rachel Maddow. Kellywise begged the fake Anderson Cooper to put her on TV, and tried to coerce him with his worst fears.

And then came a friendly face to trick the anchor into the sewer.