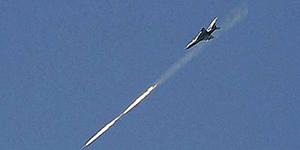 A military source told SANA that the airstrikes targeted positions and gatherings of ISIS in the city of al-Muhassan and the villages of Boqrous Fouqani and to the east of Boqrous al-Tahtani and al-Boulail.

Scores of terrorists were killed in the airstrikes, in addition to destroying one of their armored vehicles and a number of machinegun-equipped cars.

SANA reporter said that army units also advanced in the northern side of the city to the east of Euphrates River, tightening control over al-Salihya village.