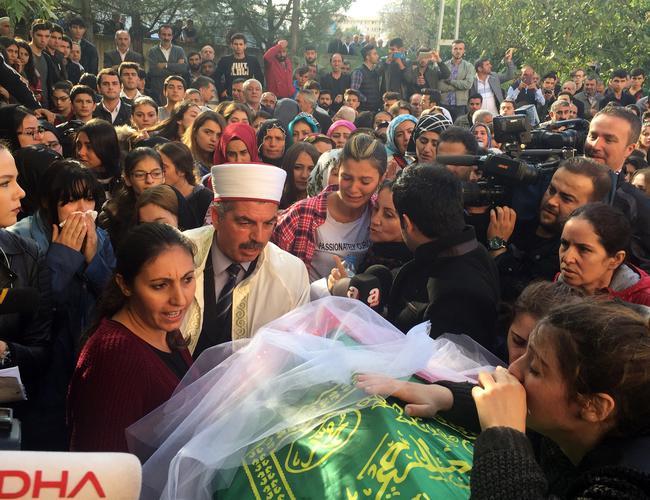 Tension rose after a car struck a crowd and gunfire broke out on Oct. 14 during the funeral of Helin Palandöken, a teenager who was brutally murdered by Mustafa Yetgin, a man claimed to be her ex-boyfriend, in Istanbul a day earlier, daily Habertürk has reported.

“Our young ones are buried. I’m addressing the police, the ministries and the authorities here. Let’s occupy school entrances. Let’s put an end to this,” Kenan Yıldırım, an imam, said at the 17-year-old girl’s funeral at a cemevi, the house of worship for Alevis.

During the slain girl’s funeral, in which her coffin was draped in a bride’s veil and carried by women, the driver of the car was stuck amid the crowd, who evoked aggressive behavior and began kicking the vehicle and broke its wipers.

One person fired a blank firing gun into the air, drawing reaction from the crowd, who assumed it was the police. Some participants argued with the police officers.

Palandöken was buried alongside her mother, Saadet Palandöken, who died in a car accident five years ago.

The 17-year-old was shot when she had her eyes closed, according to an eyewitness. She knew her perpetrator and had written on her social media account she was afraid to go out because she had a stalker, a report said.

“It happened near me. [He] got out of a red car, greeted us and then opened fire. I heard this person was harassing Helin before. He waited for her in front of the school,” Enis Koç, Palandöken’s friend, said.

The 21-year-old perpetrator, Yetgin, had bought the shotgun online, a gun vendor said in his police testimony. Anyone can buy the guns online, with nine installments, the salesman said.

“Helin broke up with this guy, whom she had a relationship with for a year, before school opened. He was constantly harassing her. Helin was an intern at the Tuzla Municipality. He was sending her flowers and threatening her. He would wait for her to get out. Helin told us she was scared,” said another friend of hers, who wanted to remain anonymous.

Two other teenagers who were wounded during the incident were taken to hospital.

“Folks, do not love anyone,” Yetgin had written on one of his social media accounts on Oct.