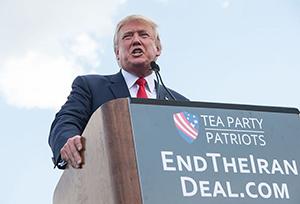 Decertifying compliance with the nuclear deal will make the world less safe and less trusting of Washington.

President Donald Trump has finally made good on his threat to decertify Iranian compliance with the 2015 nuclear deal. Despite warnings from his most senior national security officials — Secretary of State Rex Tillerson, Secretary of Defense James Mattis and National Security Advisor H.R. McMaster — Trump is determined to eviscerate the legacy of his predecessor, Barack Obama, global security be damned.

Trump Says Iran Deal Will Be Terminated Without Fixes

Trump’s decision flies in the face of eight reports from the International Atomic Energy Agency confirming that Iran is adhering to the Joint Comprehensive Plan of Action, which went into effect in January 2016. It also puts the U.S. at odds with its European, Russian and Chinese negotiating partners, all of whom have reiterated the importance of the agreement for global security and nonproliferation.

Trump’s action doesn’t in and of itself shred the nuclear pact: Congress now has 60 days to vote on that step, and the White House is asking it instead to set up a number of “trigger points” that would result in re-imposition of sanctions.

But don’t be fooled: By decertifying in the face of all evidence that Iran is complying, Trump is in effect going rogue, and the consequences will be felt across the globe.

The U.S. and Europe brought Iran to the negotiating table after 10 years of coordinated and painstaking sanctions that targeted all aspects of Iran’s economy, including banking, energy and trade. Over two administrations (those of George W. Bush and Obama), Washington, in close cooperation with the EU effectively cut Tehran off from the global economy.

This was a remarkable act by the Europeans. Tehran, despite the 1979 Islamic Revolution, had robust commercial relationships with Europe. Iranians could travel with relative ease to Europe and, despite being isolated from the U.S., were getting essential goods and services such as medicine and technology from the EU.

With Brussels and Washington united, a good cop-bad cop routine was successful in extracting meaningful concessions from Iran which led to the nuclear deal.

In the two years since the deal was signed, Europe has slowly regained its access to the Iranian market. Iran’s economy is rebounding. EU foreign policy chief Frederica Mogherini has called the nuclear deal vital to international peace and security. French President Emmanuel Macron and U.K. Prime Minister Theresa May have gone on record saying the deal is doing what it was intended to do, prevent Iran from developing a nuclear weapon. While neither are opposed to starting discussions on other troubling aspects of Iran’s behavior, so long as IAEA maintains that Iran is living up to its obligations, the EU does not want the nuclear pact abrogated.

Trump’s actions, and any new sanctions from Congress, will drive a wedge between Washington and Europe on Iran. It would be virtually impossible to reconstitute that sanctions regime that was in place before the nuclear deal came into effect. Trump’s decision will be viewed as callous disregard for multilateral negotiations and norms. It will reinforce the image that Iran often portrays the U.S. as being a bully on the world stage that does what it wants with reckless abandon — alliances and commitments notwithstanding. It’s an image that Trump embraces in both style and substance.

The implications for Europe go well beyond the Iran deal. With Trump’s precedent of shunning the global security architecture that the U.S. has led for 75 years now in question, Europeans will be left wondering if the U.S. would really live up to its security commitments if, say, Russia became more aggressive in the Baltic states or Eastern Europe.

On top of that, as if one nuclear crisis wasn’t enough, the message Trump is sending to North Korea couldn’t be worse. If there is any hope of putting limits on that nation’s nuclear weapons program it would be to show its leadership that entering into multilateral negotiations and honoring their commitments would bring them back in from the diplomatic cold.

With the example of Iran complying and Trump refusing to certify that compliance, what incentive would Kim Jong Un have to abandon his nuclear arsenal? After all, Tehran never had the leverage that Kim has now, it never produced a nuclear weapon. It would harden the view of many in North Korea that they should never give up their nuclear capabilities or negotiate with Washington.

But perhaps the worst outcome of Trump’s actions will be felt in Iran itself. Regime hardliners who never liked the nuclear deal will give relative moderates like President Hassan Rouhani and Foreign Minister Javad Zarif a collective “I told you so.” It will only re-enforce the perception that the U.S. can’t be trusted and close the door on any future negotiations.

Hawks around Trump seem to think that this move will bring Iran to the table to discuss other legitimate issues of concern, such as Tehran’s human-rights abuses, sponsorship of terrorism and efforts to destabilize the Middle East. Or perhaps to agree to “add-on” clauses to the 2015 deal putting new restrictions on Iran’s nuclear research.

These hopes fly in the face of reason. If the U.S. fails to live up to its own promises, it will just embolden Tehran to consolidate its gains and heighten tensions with its neighbors, particularly the Gulf Arab states, and accelerate its ballistic missile program. No future Iranian leader will be able to credibly make the case to his people that negotiating with the U.S. and compromising is better way forward than confrontation and defiance. Iran may yet stay in the deal, but it will be leery of any follow-on agreement on other aspects of its behavior.

It now falls on Congress to save the deal and restore U.S. credibility on the world stage. It should not re-impose sanctions absent an Iranian breach that is verified by the IAEA. It should strictly enforce the terms of the agreement and disentangle it from other aspects of Iran’s behavior that are troubling.

Still, no matter what decision Congress takes, the fact that an American president would not live up to the word of the U.S. is something the international community is not used to. It will further fragment partners, allies and embolden adversaries. It will make the world a more dangerous place