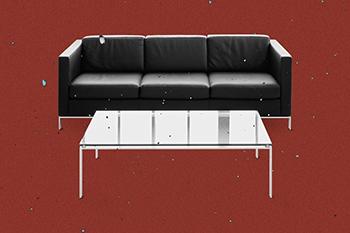 Want to receive exclusive insights from The Atlantic—while supporting a sustainable future for independent journalism? Join our new membership program, The Masthead.

The chorus of condemnation against Harvey Weinstein, as dozens of women have come forward to accuse the producer of serial sexual assault and harassment, has often turned on a quaint-sounding show-business cliché: the “casting couch.” Glenn Close, for instance, expressed her anger that “the ‘casting couch’ phenomenon, so to speak, is still a reality in our business and in the world.”

The casting couch—where, as the story goes, aspiring actresses had to trade sexual favors in order to win roles—has been a familiar image in Hollywood since the advent of the studio system in the 1920s and ’30s. Over time, the phrase has become emblematic of the way that sexual aggression has been normalized in an industry dominated by powerful men.

How did this seemingly innocuous phrase become so ensconced as a standard show-business trope? The casting-couch tradition originated in theatrical productions on Broadway well before the Hollywood film industry became the new locus of the entertainment world. In his book The Boys From Syracuse: The Shuberts’ Theatrical Empire, Foster Hirsch details how Lee Shubert, the eldest of three brothers who helped establish Broadway’s theater district in the first two decades of the 20th century, kept “an elegantly furnished boudoir, reserved for leading ladies and promising ingenues, and a shabby, spartanly furnished room with a single couch where he met chorus girls and soubrettes.”

“If you didn’t sleep with them you didn’t get the part,” the dancer Agnes de Mille would later recall about the Shubert brothers. “The Shuberts ran a brothel: Let them sue me.”

The phrase casting couch became linked to the Shuberts, at least in retrospect, as the etymologist Peter Tamony discovered. As recorded in the Historical Dictionary of American Slang, Tamony collected a usage example from 1931, describing an event that “happened some time ago, long before the casting couches were thrown out of the Shubert Building.”

By then, however, the idea of the casting couch had moved out west to Hollywood. In a 1920 article in Photoplay magazine, a New York journalist reported on “immorality in camera-land,” where “young women are not advanced in their chosen profession unless they submit to the advances of studio managers, directors, or influential male stars.”

The phrase casting couch had evidently not yet become part of Hollywood parlance, since it doesn’t appear in the Photoplay article. But in 1924, a silent stag film may have been responsible for introducing the expression to a wide audience. The film was titled The Casting Couch, and it featured the stereotypical scenario of an actress auditioning for a role and giving in to the salacious demands of the casting director. (It’s hard to know for sure if the title of the film actually dates to 1924, since the surviving prints of such “blue” movies have often been heavily edited after the fact.)

In her 1989 history of pornography, Hard Core, Linda Williams calls The Casting Couch “a classic of the genre,” quoting the wry “moral” on the movie’s final intertitle: “The only way to become a star is to get under a good director and work your way up.” Still, the phrase casting couch might have been considered a little too risqué for consumption beyond the prurient stag-film audience at that point.

While actual casting couches may have become a thing of the past, the environment they bred has lingered.

That changed by the end of the Roaring ’20s, as sexually suggestive language worked its way into the mainstream. In 1929, Max Lief, a writer for the New York Daily News, published Hangover: A Novel of Broadway Manners, and the flap copy featured some colorful slang: “From wisecracker to highjacker, from 15-and-5 taxi driver to five-dollar cover nightclub pirate, from beminked showgirl to casting-couch producer—the ladder is long, but the dizzying denizens of the Gland Canyon known as Broadway somehow climb it.” (That’s right, a nickname for Broadway was “the Gland Canyon.”)

Five years later, in 1934, casting couch was considered a harmless enough phrase that it could be casually dropped into a newspaper column about Hollywood. The word sleuth Barry Popik uncovered an example from April of that year written by the syndicated gossip columnist Sidney Skolsky: “The casting couch song: ‘You oughta be in pictures.’” (The song “You Oughta Be in Pictures” had just become something of a Hollywood anthem after Rudy Vallee made it a hit.) Skolsky, as Popik notes, was responsible for circulating an even more famous bit of movie-business slang: The earliest known example of “Oscar” as a nickname for the Academy Award appeared in a March 1934 Skolsky column.

Despite these public appearances, the notion of the casting couch may still have been something of a Hollywood in-joke. Just a few years later, in 1937, a writer for the Chicago Tribune seemed to miss the suggestiveness of the phrase, using it to refer to a female-run casting bureau at a local radio station. Variety, as Matthew Dessem recently noted on Slate, took the opportunity to draw attention to the Tribune writer’s embarrassing slip-up.

Meanwhile, F. Scott Fitzgerald, who spent the final few years of his tragic life as an alcoholic hack writer in Hollywood, also became familiar with the phrase, working “casting couch” into his unfinished novel, The Last Tycoon, published after his death in 1941. In the story, Cecelia, the daughter of a movie producer, takes a car ride with Wylie, a down-on-his-luck screenwriter, and tells him about her plans to meet with a powerful producer named Monroe Stahr. She imagines the meeting in Stahr’s office is interrupted by someone coming into the room. “And you jump up quickly off the casting couch smoothing your skirts,” Wylie adds. The implication is obvious: There’s no need to spell out exactly what Cecelia is doing on Stahr’s couch.

Over time, the phrase came to be used less literally, becoming more of a metonym for the skewed sexual politics of show business. When the Hollywood columnist Dick Kleiner wrote about the young casting director Marvin Paige in 1965, he was quick to note that Paige’s office lacked a couch. Paige informed him that “the days of the casting couch—if they ever existed—are over.”

But while actual casting couches may have already become a thing of the past in the ’60s, the environment they bred would linger. Ironically enough, a young Theresa Russell reportedly faced such a situation when she was up for the role of Cecelia in the 1976 movie adaptation of The Last Tycoon. Russell says she rebuffed the advances of the producer, Sam Spiegel, but still managed to get the part. Decades later, the Weinstein scandal makes it readily apparent that the legacy of the casting couch still plagues Hollywood, but the revelations could finally help dismantle the pernicious culture that the phrase embodies.