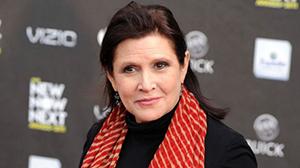 In the wake of the Harvey Weinstein scandal, more stories have emerged of misogyny in Hollywood.

But, in amongst all of the stories of sexist and predatory behaviour, one story has cut through as an incredible example of women sticking up for each other.

It has the late and great Carrie Fisher as its protagonist. And it heavily features a cow’s tongue. Really.

Heather Robinson, a screenwriter best known for the 2005 romantic comedy The Perfect Man starring Heather Locklear and Hilary Duff, recently made a call to an Arizona local radio station to tell the story of how Fisher stood up for her when she had a bad experience with an Oscar-winning producer (who Robinson did not name) in 2000.

Speaking to Tucson’s Mix FM, Robinson explained that she had met Fisher and other A-listers on an AOL forum in the late 1990s.

(We know this makes the story sound fake, but this is also listed on this woman’s official website. Apparently Fisher encouraged her to write The Perfect Man. And she really did write that movie! So, let’s all take our grain of salt and continue.)

Robinson said she had told Fisher about the bad experience.

“About two weeks later, [Fisher] sent me a message online and she said, ‘I just saw (blank) at Sony Studios. I knew he would probably be there, so I went to his office and personally delivered a Tiffany box wrapped with a white bow,'” she recounted.

“I asked her what was inside and she said, ‘It was a cow tongue from Jerry’s Famous Deli with a note that said, ‘If you ever touch my darling Heather or any other woman again, the next delivery will be something of yours in a much smaller box!””

U can only warn people what u know. #CarrieFisher stood up 4 me back in 2000 here is my interview with @mixfmtucson https://t.co/EgWe4qz8G6

Bizarrely the “human biological material in a Tiffany’s box” play appears to be somewhat of a genre of insult for the A-list.

In a 2015 interview with James Corden, Sharon Osborne revealed she had routinely made her children poo into the blue boxes when they were younger, so she could send the gifts to her critics.