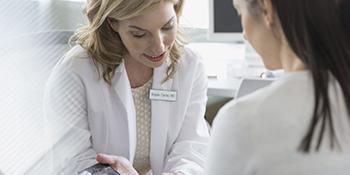 For many of us, not only finding the time to get to the damn doctor’s but also building up the emotional strength to raise very personal issues with a complete stranger is quite an ordeal in itself. Of course, other people can walk in there and not even feel remotely angsty and truly good for them.

Now though, it seems doctors are going to be asking patients a lot more than just, “where does it hurt?” or, “how long have you been experiencing this?”.

According to The Metro new NHS guidelines will see doctors quizzing patients about their sexuality. The directive will be rolled out in 2019 and will see anyone visiting a doctor who is over the age of 16, asked to define their sexuality as “straight”, “gay”, “bisexual”, “other”, “not sure” and “not known”. And this will be the case whether you’re visiting your GP or going to hospital.

The NHS says this is to coincide with changing equality laws, and that the reason they’ll be asking patients for this info is so they can ensure people are not being discriminated against or treated differently due to their sexuality.

Of course, patients cannot and will not be forced to answer. And each NHS trust will have the choice whether they want to opt in or out of this new directive.

An NHS England spokesperson told The Metro, “All health bodies and local authorities with responsibility for adult social care are required under the Equality Act to ensure that no patient is discriminated against.

“This information standard is designed to help NHS bodies be compliant with the law by consisting collecting, only where relevant, personal details of patients such as race, sex and sexual orientation. They do not have to do it in every area, people do not have to answer the questions and it will have no impact on the care they receive.”

But Dr Peter Swinyard, Chairperson of the Family Doctor Association called the new guidelines “potentially intrusive and offensive”. He told the BBC that particularly for older patients, sexuality”doesn’t affect health outcomes or care”.

He added, “Given the precious short amount of time a GP has with a patient, sexuality is not relevant.”

The chief executive of the LGBT foundation in Manchester, Paul Martin commented, “if we are not counted we don’t count” and called the new guidelines an “important step in the right direction” as it would help to address the inequality in health and social care that LGBT folk encounter.