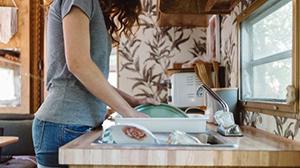 “We’ve recently employed a cleaner but my husband says it’s an indulgence. Not for me! I work full time and I’m tired of being the one responsible for keeping our house tidy, doing all the cooking and getting the kids to bed. How can I deal with his snide comments about having help with cleaning?”

Rowe answered with characteristic aplomb, telling the anonymous writer that her investment was “money well spent as it means you can focus on what you enjoy doing when you’re home instead of feeling resentful.” She then advised the harried woman that she needed to “have a calm chat” with her husband and tell him “you’d like him to help more”.

Reasonable advice I suppose, although mine would have probably been a bit more blunt: divorce him.

Before you start writing angry letters to the editor, demanding my man-hating self be turfed from the building, relax. That little thing there is what we call a ‘joke’. Of course I’m not advocating the dissolution of a marriage and a family because one party is too lazy to do any of the work himself.

I’m advocating the dissolution of a marriage and a family because this woman’s husband is clearly a selfish dickhead who views his wife’s job as secondary to her larger role as an unpaid domestic labourer with the primary responsibility of facilitating his life, ambitions and home comforts.

I bet he expects her to do his laundry too.

These dynamics are all relatively new territory for me, because prior to my current relationship I had never lived with a romantic partner (and I have to say that should this relationship ever dissolve, I’ll never live with another one again – women who enjoy sex with men are much better off living alone and inviting them into their houses as guests occasionally, when they feel like it.)

But one of the more gobsmacking things I’ve found since having a child is the sudden access and insight I’ve been given to the domestic lives of women all over mainstream Australia. When I was pregnant, I signed up to an expectant mothers’ online community, joining a forum with other women due at the same time as me. Through the months and months (and months) of pregnancy into the terrifying beyond of parenting, I looked on as women shared not only queries about Braxton Hicks and teething, but also intimate, vulnerable stories detailing the extensive emotional and domestic labour they perform in order to keep the tenuous balance of their families in check.

There have been more stories than I can count of women whose partners cajoled them into sex either in the late stages of their pregnancies or early postpartum weeks, with many of the women tentatively asking each other how they could help their sooking partners to understand that they just didn’t feel physically or emotionally up for it. (In July, Ginger Gorman wrote a harrowing report about the numbers of women who feel pressured to have penetrative sex shortly following childbirth.) And while that is certainly more serious than the expectation that women in hetero partnerships ‘keep house’, it’s part of the same canopy of labour enforced by gender divisions and sexism in the home.

And yet, these kinds of conversations are also all too easily shut down.Because why would something as meaningless and petty as the unpaid labour performed by women to the detriment of themselves and the endless benefit of the men in their lives possibly be a topic worth discussing?

But it’s not irrelevant. A 2016 study presented to the American Sociological Association found that “most Americans still believe that women should be responsible for the majority of the cleaning, cooking, grocery shopping and child-rearing – even if the woman has a full-time job or makes more money than her partner.” In fact, it’s not uncommon for women who return to work after having children to feel especially pressured to make sure they ‘stay on top of things’, because somehow showing your lazy husband that you can still keep his shirts ironed is the justification he needs to ‘allow’ you to go out and earn a living.

The fact is, there are still overwhelming numbers of heterosexual partnerships where this kind of labour is enforced daily in both subtle and not so subtle ways. The problem encountered by our advice seeker – that of needing to outsource some of the work around her shared home to a professional and yet encountering opposition from the partner who is statistically far less likely to ever do it himself – is not uncommon, whether one person is working or both. The idea that money is a luxury when it’s spent on work women are ‘supposed’ to do for free is widespread.

But that it can be declared as such by someone who quite clearly has the luxury of not having to do the work either way is simply infuriating.