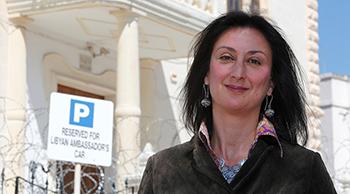 One of Malta’s most prominent investigative journalists, Daphne Caruana Galizia, has been killed in a presumed car bomb attack. She was most recently known for exposing the Maltese prime minister’s offshore dealings in the Panama Papers scandal.

The 53-year-old was killed when the car she was driving exploded near her home in Bidnija, near Mosta in northern Malta, the Times of Malta reports.

The explosion took place at around 3pm local time according to Malta’s police force.

Caruana Galizia ran the hugely popular ‘Running Commentary’ blog, which had a track record of highlighting scandals in the Mediterranean country.

One such prominent scandal came about earlier this year, when Caruana Galizia accused Maltese Prime Minister Joseph Muscat, his wife and members of his government, of owning offshore companies in Panama – all part of the long-running Panama Papers leak.

While Muscat denied the allegations, the scandal did cause him to call a snap general election in June, which his party won, losing only two House of Representatives seats.

“I condemn without reservations this barbaric attack on a person and on the freedom of expression in our country,” he said. “Everyone knows Ms Caruana Galizia was a harsh critic of mine, both politically and personally, as she was for others too.”

However, he said there could be “no justification… in any way” for the killing. “I will not rest before justice is done,” he added.

Malta Television reported that Caruana Galizia had filed a complaint to the police two weeks ago to say she had received threats but gave no further information.

In 2016 the blogger was named as one of Politico’s “28 people who are shaping, shaking and stirring Europe.”