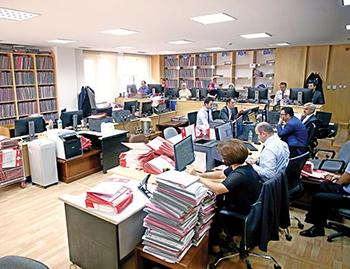 A panel set up to accept appeals by dismissed public employees and companies closed down by state of emergency decrees introduced in the wake of the July 2016 coup attempt will start delivering its decisions in November.

“Rapporteurs are now inspecting the files. We plan to get the first results as of November,” Selahaddin Menteş, the panel’s head, told daily Hürriyet.

For public employees, each applicant whose appeal is accepted by the commission will be offered a job relevant to their previous one within 15 days. The rejected appeals may still undergo judicial processes.

The results of the applications will not be made public but will be submitted to the applicants.

“Before the establishment of the commission the complainants were filing complaints to several different places,” Menteş said, adding that the panel has also been welcomed by the European Court of Human Rights (ECHR).

“We first classified the complaints and archived them,” he added.

Complainants include dismissed employees, students whose scholarships have been cancelled, retired security personnel whose statuses have been stripped, and companies and institutions that have been closed down.

In addition to the complaints already placed, the 1,000 people dismissed with a recent state of emergency decree can apply to the panel in 60 days. Another 300,000 people have appealed to public offices for similar complaints, while there are 100,000 other appeals being inspected by judicial institutions, Menteş stated, speculating the number of all appeals submitted to the panel “could exceed half a million.”

Applications so far made to the ECHR will also be sent to the panel.

The commission asks each applicant personally why they have been dismissed, Menteş said, adding that it collects documents from the Prime Ministry, the National Intelligence Organization (MİT), the police and other state institutions upon appeals.

Judges also look into whether the applicants have used ByLock, a smartphone application used by the followers of U.S-based Islamic preacher Fethullah Gülen, believed to be the mastermind of the July 15, 2016 coup attempt.

They will also investigate whether the applicants have accounts in Bank Asya, a now-closed Islamic lender with direct links to Gülen.

Tens of thousands of public workers, including police officers, soldiers and teachers, have been dismissed with state of emergency decrees in Turkey since the July 2016 coup attempt.

The commission is working on the applications according to the dates when the decrees were issued, and some applications that are finalized earlier may be prioritized.

Two archives of the panel have already run out of space and a third one will now be arranged, according to officials. The commission also plans to establish an online system in order for the applicants to monitor the status of their applications.