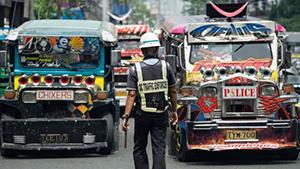 A public transport strike has sparked fierce debate in the Philippines, as Filipinos rally around the iconic mini-buses, called jeepneys.

Earlier this year, authorities launched a controversial programme to modernise the public transport system, including buses, utility vans and jeepneys.

Transport groups argued it is unfair to jeepney drivers and have launched a two-day strike, the third this year.

Jeepneys are a popular form of public transport throughout the Philippines.

Schools announced the suspension of classes while government offices were ordered closed as a result of the strike.

They are known for their cheap fares, crowded seating and kitsch decorations but are also viewed as symbols of Manila’s infamous traffic congestion and air pollution.

As part of the changes proposed by the government, older jeepneys are currently being phased out to make way for electronic, more environmentally-friendly models.

Around 180,000 jeepneys will need to be replaced, according to the Land Transportation Franchising and Regulatory Board.

All buses, jeepneys and public utility vans will also be put under an automated fare collection system by 2020.

Talk of the transport strike dominated Twitter in the Philippines and ignited fierce debate among many social media users.

A Twitter movement titled ‘No To Jeepney Phaseout’ gained strong momentum with many Filipinos online.

Among the commentators on Twitter was Julius Cainglet, from the capital city Manila.

A regular jeepney rider, he voiced his personal support for the drivers by participating in Monday’s strike.

“Jeepney drivers are among the poorest and most vulnerable. And jeepneys are part of our Philippine culture,” he told BBC News.

“Phasing out a cultural and national symbol like the jeepney speaks of our government’s lack of recognition of its national identity. The number of jeepneys have been on the decline anyway over the past few years. There’s no need to kill them altogether.”

He also mentioned that he and his peers were feeling the impact of Monday’s transport strike.

“It was more expensive [commuting] by taxi and Uber and less comfortable commuting by habal-habal (a local motorcycle ride) but a worthy sacrifice to show solidarity,” he said.

Medical student Ivan Pulanco, 23, told BBC News he supports the strikes and described it as a “heartless and unfair decision” by the Duterte administration to “expect thousands of poor jeepney drivers to buy newer and expensive electric jeepneys”.

“We want cleaner jeepneys on our streets but the government’s plan to phase out the old jeepneys will kill the livelihoods of thousands,” he said.

“The new e-jeepneys that they are promoting can cost as high as 1 million pesos ($20,000). How can the regular drivers afford that?”

According to CNN, transport group Piston which organised the latest round of protests claimed that “more than 6,000 jeepney drivers” would be impacted.

But despite public outcry, the Philippine government argued that it has not overlooked the needs of under-privileged drivers unable to afford the new approved jeepneys.

Financial loan schemes were set up as part of their re-vamp efforts.

“The government will continue with discussions, consultations, and further collaboration with members of the public transport sector, particularly in explaining the financial scheme to PUV operators and drivers who wish to purchase new units,” a presidential spokesman said.

“All business models based on actual studies ensure profitability [for] the drivers or operators,” a statement read.

“The Department of Transportation would also like to express its utmost dismay over Piston’s refusal to discuss with government their issues on the PUV modernisation program, and its consistent appeal to public sentiment through false propaganda and misinformation.”

Reporting by the BBC’s Heather Chen.

Maria Shriver reacts to Andrew Cuomo’s apology: ‘Will that be enough?’