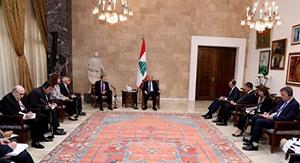 President Michel Aoun held talks Monday in Baabda with the envoys of France, China, Russia, the UK, the U.S., the EU, the Arab League and the U.N. and the meeting focused on the impact of the Syrian refugee crisis on Lebanon.

Aoun, who called the meeting, stressed that the “return of the displaced to stable and safe areas in Syria must be done without linking the matter to a political solution in Syria.”

The President warned of the dangers of Syrian displacement, saying “it is in the interest of the international community to address the matter in order to avoid an outburst as a result of the crisis.”

“The risks will affect everyone,” he warned.

Aoun added that he is “not asking for the return of Syrian refugees who have political problems with the Syrian regime.”

U.N. Deputy Special Coordinator for Lebanon, in his capacity as Officer in Charge of UNSCOL, reaffirmed the envoys’ “strong support in assisting Lebanon to mitigate the impact of the Syrian crisis.”

They expressed their “full understanding of the concerns that are being voiced by Lebanese citizens,” underlining that “a return of refugees to their country of origin must take place in safety, dignity and voluntarily, in accordance with principles of international law,” the statement said.

“The Ambassadors and the DSCL underscored that the vast majority of the refugees want to return and that they do not consider local integration in Lebanon an option,” it added.

The Ambassadors and the U.N. remain “committed to supporting Lebanon’s security, stability and territorial integrity, and call for increased international solidarity to meet the humanitarian needs of Lebanese, Syrian and other vulnerable communities,” the statement said.

Al-Joumhouria daily had reported that Aoun was expected to explain to the ambassadors, and later to representatives of international organizations, the negative repercussions at the economic, social, educational and health levels in Lebanon that are resulting from the Syrian refugee influx.

The president will also shed light on the Syrian competition in the Lebanese labor market.

The daily also said that the issue of Syrian refugees will be addressed “seriously” starting this week.

Aoun’s meeting with the ambassadors on Monday signals the beginning of regional and international consultations that the president intends to make over the issue, the newspaper said.

He will later have talks with ambassadors of donor countries to put forward an implementation plan for the return of the displaced, al-Joumhouria added.