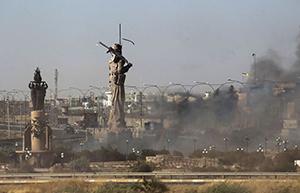 The president said he would stop Iran’s meddling. Attacks on the Kurds of Kirkuk are his chance.

Since he spoke on Friday, the Iraqi army and Iran-backed Shiite militias have moved on the northern city of Kirkuk, responding to Iraqi Kurds’ vote last month in support of independence. The Kurds have responded by sending more of their own forces to the region. This is what “meddling” looks like.

The head of Iran’s Quds Force, Qassem Suleimani, has been in Baghdad, consulting militia leaders and Iraq’s government on the response to the referendum. On Sunday night the Kurdish Peshmerga and Iraqi forces exchanged fire. And while Iraq’s military is within its rights to send its army into the disputed area of Kirkuk, doing so in the dead of night on a mission to take back oil fields and a military base secured by Kurdish militias is a major provocation.

This would be an ideal moment for one of Trump’s famous tweets, something like: “If Iraqi forces want to attack our Kurdish allies, they can’t use the tanks and Humvees WE gave them!!!” That should be followed up by high-level consultations with Baghdad to make clear there are consequences if the army and Shiite militias continue down this course.

Instead, the Trump administration is suffering from a bout of what might be called both-sides syndrome.

The U.S. Embassy in Baghdad, for example, issued a statement Monday that spoke of “the peaceful reassertion of federal authority, consistent with the Iraqi constitution, in all disputed areas.” It called on all parties to “immediately cease military action and restore calm.” And of course the embassy is concerned about reports about the loss of life.

Another statement from the coalition against the Islamic State says the exchange of fire between Peshmerga forces and the Iraqi army was caused by a misunderstanding.

Really? While the Iraqi prime minister, Haider al-Abadi, has done his best to calm tensions in his public statements, the same cannot be said of the Shiite militias supported by Suleimani’s Quds Force. A spokesman for those militias, Karim al-Nuri, said Sunday that any Peshmerga that confronted his forces would be treated like the Islamic State (a strange statement considering the Peshmerga have fought bravely against those jihadis since 2014).

The background here is important. Saddam Hussein purged Kirkuk of Kurds. After the 2003 liberation of Iraq from his dictatorship, Kurds began to resettle in the city, causing a crisis for the Arab population that had replaced them. The Iraqi constitution allows for a referendum on the status of Kirkuk, but successive governments in Baghdad have delayed this vote.

The situation changed dramatically in 2014. After the Islamic State rampage that conquered Mosul, the jihadis nearly took Kirkuk. When I was in the city in 2015, its governor, the American-trained Kurdish neurosurgeon Najmaldin Karim, told me that on June 10, 2014, the Iraqi general in charge of protecting Kirkuk had given up in the face of the Islamic State offensive. His men changed into civilian clothes and fled their positions. The Kurdish Peshmerga filled that void and prevented the Islamic State from taking the city. They have secured Kirkuk ever since.

On Sunday some Pershmerga retreated from positions in a nearby oil field and a military base where U.S. special forces are stationed. However they remain in the city.

It goes without saying that two American allies — the Kurdish Peshmerga and the Iraqi army — shooting at one another is a dangerous distraction from both the war against the Islamic State and the president’s strategy to counter Iran.

U.S. leadership is needed at this moment. It’s time to build on Secretary of State Rex Tillerson’s last-minute offer to the Kurds to support negotiations over federalism. It came too late for the Kurdish leaders to call off last month’s referendum, but the idea remains worthy. (For what it’s worth, Kurdish leaders have said repeatedly that the referendum supporting independence is not itself a declaration of statehood.)

Effective leadership will involve more than just stalling the Kurds. The U.S. must make clear that Iraqi provocations will have consequences.

And Trump should make good on the threat he made just three days ago, to stop Iran’s meddling.

Retreating to pointless neutralism only exacerbates the crisis.