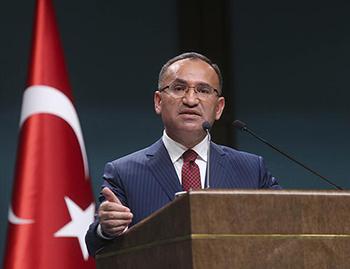 Turkey announced on Oct. 16 that it has closed its airspace to flights to and from the airports of the Iraqi Kurdistan Regional Government (KRG) and it has begun a process to let the Iraqi central government take control of a key border gate, following the recent KRG independence bid.

Bozdağ also stated that the government has decided to launch work with the central Iraqi government for the handover of the İbrahim Khalil (Habur) border gate from the KRG to Baghdad.

These two measures were discussed at the biannual National Security Council (MGK) meeting held under the leadership of President Recep Tayyip Erdoğan and top civilian and military officials on Oct. 16 before the cabinet meeting.

“[During the meeting] the steps taken right after the KRG’s illegitimate and unconstitutional referendum were evaluated and new measures that can be taken were discussed. Closing Turkish air space to the KRG and handing over control of the Ibrahim Khalil Border Gate to the central Iraqi government were advised to the government,” read a written statement issued by the MGK after the meeting.

Turkey, along with Iraq and Iran, has strongly rejected the KRG’s September independence referendum and urged Arbil to cancel the process before it imposes strong sanctions.

The MGK said it evaluated the measures taken by the central Iraqi government, particularly in Kirkuk, emphasizing the importance that Turkey attaches to the territorial integrity and political unity of Iraq.

It voiced Turkey’s expectation that the latest military offensive launched by the Iraqi government to retake Kirkuk will “rebuild the demographic structure of the city.” It said Kirkuk, which is home to a large population of Iraqi Turkmens, has been subject to demographic changes by the KRG administration amid attempts to take control of the oil rich province.

Turkey and Iraq had launched a military drill before the Sept. 25 referendum along the Turkish-Iraqi border, which was interpreted as preparation to take control of the single border gate from the hands of the KRG.

The MGK also discussed the ongoing military operation into Idlib, recently kicked off as part of a deal between Turkey, Iran and Russia provided in the Astana Agreement. It stated that the council evaluated that the Turkish troops in the de-escalation zone in Idlib “are continuing their operation successfully.”