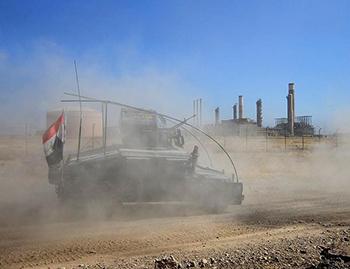 Turkey has expressed its readiness to cooperate with the central Iraqi government against the outlawed Kurdistan Workers’ Party (PKK) in Kirkuk, while urging the Iraqi Kurdistan Regional Government (KRG) “not to provide shelter to the terrorist organization” in that region.

“We once again emphasize the importance we attach to the protection of Iraq’s political unity and territorial integrity. We also underline our readiness for any kind of cooperation with the Iraqi government on the termination of the PKK presence in Iraqi territories,” the Turkish Foreign Ministry said in a written statement on Oct. 16.

Ankara’s statement came as the Iraqi government launched an offensive against the KRG’s positions in and around Kirkuk, an oil-rich city whose status has not yet been decided. The start of the offensive led to the withdrawal of the KRG Peshmerga forces from a number of key locations.

The Turkish Foreign Ministry said it was closely following the Iraqi government’s moves for the “establishment of the constitutional order in Kirkuk,” which has a large Turkmen population.

“We welcome the Iraqi government’s statement that no tolerance will be shown to PKK members in Kirkuk and that the mobilization of these groups will be considered an act of war,” said the statement.

It also urged the KRG “not to make another mistake” by allowing the PKK presence in the region, vowing that the KRG “will be held responsible if it lets the PKK find shelter.”

“Turkey will stand with the Iraqi government in its steps that aim to establish lasting peace and stability in the country,” it added.

Gantz to Austin: We will work with US to ensure new Iran deal protects Israel