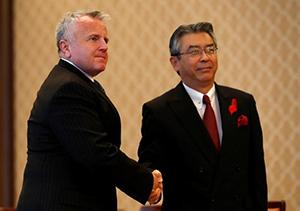 TOKYO/UNITED NATIONS (Reuters) – The United States is not ruling out the eventual possibility of direct talks with North Korea, Deputy Secretary of State John J. Sullivan said on Tuesday, hours after Pyongyang warned nuclear war might break out at any moment.

Talks between the adversaries have long been urged by China in particular, but Washington and its ally Japan have been reluctant to sit down at the table while Pyongyang continues to pursue a goal of developing a nuclear-tipped missile capable of hitting the United States.

“Eventually, we don’t rule out the possibility of course of direct talks,” Sullivan said in Tokyo after talks with his Japanese counterpart.

“Our focus is on diplomacy to solve this problem that is presented by the DPRK. We must, however, with our allies, Japan and South Korea and elsewhere, be prepared for the worst should diplomacy fail,” he said.

Leaflets apparently from North Korea calling Trump a “mad dog” and depicting gruesome images of him have turned up across central Seoul in recent days, adding an unusually personal element to North Korean propaganda.

“The situation on the Korean peninsula where the attention of the whole world is focused has reached the touch-and-go point and a nuclear war may break out any moment,” North Korea’s Deputy U.N. Ambassador Kim In Ryong told a U.N. General Assembly committee on Monday.

“As long as one does not take part in the U.S. military actions against the DPRK (North Korea), we have no intention to use or threaten to use nuclear weapons against any other country,” according to Kim’s prepared remarks for the discussion on nuclear weapons. Kim did not read that section out loud.

The U.N. Security Council has unanimously ratcheted up sanctions on North Korea over its nuclear and ballistic missile programs since 2006.

The most recent U.N. sanctions banned exports of coal, iron ore and seafood, aimed at cutting off one-third of North Korea’s total annual exports of $3 billion.

Experts say North Korea has been scrambling to find alternative sources of hard currency to keep its economy afloat and to advance its weapons program further.

Taiwan’s Central News Agency reported last week that while hackers sought to steal some $60 million from the Far Eastern Bank, all but $500,000 had been recovered by the bank.

Punters had previously risked three years hard labor for gambling in the reclusive and tightly controlled state, but the growing importance of private markets meant more people had money to spend on leisure, experts said.

“You may have ridiculed Kim Jong Un for constructing lavish facilities while struggling to feed the people, but those things are to make foreign currency, not from foreigners but from the well-offs inside North Korea because you have to pay in U.S. dollars or Chinese renminbi there,” said Lee Sang-keun, a researcher at the Institute of Unification Studies of Ewha Womans University in Seoul.

“Many North Koreans make lots of money from the market, dine at hamburger restaurants and go shopping, all of which help fatten regime coffers. That’s part of the reason why the regime still has some financial latitude despite international sanctions.”