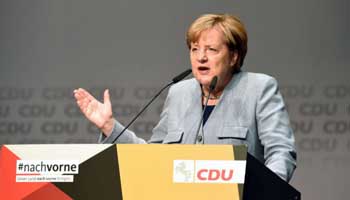 German Chancellor Angela Merkel has said she firmly believes a Brexit deal can be reached despite a lack of details from Britain. Merkel also said EU leaders agreed to cut financial aid to Turkey over rights violations.

At the end of the first day of a summit with European Union leaders in Brussels, German Chancellor Angela Merkel struck an optimistic tone about the future of a Brexit agreement between the EU and Britain.

“I have absolutely no doubts that if we are all focused … we can get a good result,” she told reporters at a press conference after midnight on Friday.

“I want very clearly a deal and not some unpredictable solution,” Merkel said, adding: “We are working on this very intensively.”

Read more: Brexit: What’s the ‘no deal’ fallout for the UK and EU?

The German leader stressed that progress has been made in negotiations on Britain’s divorce from the bloc, saying: “Despite what the British press says, this is a process that is moving ahead step by step.”

British Prime Minister Theresa May’s plea during a summit dinner, however, failed to sway Merkel’s opinion that trade talks will stay off the docket until at least December.

The chancellor said she was committed to maintaining the “good spirit” of the negotiations, but a lack of detailed proposals from the British side showed that May’s efforts were still “not enough.”

Earlier on Thursday, May told leaders gathered at the two-day summit that she wanted to set “ambitious plans for the weeks ahead” and called for swift progress in negotiations.

“We asked the Commission to make recommendations on changing and reducing the pre-accession aid,” Merkel said.

The German leader stressed that although there was an “absolutely unsatisfying human rights situation” in Turkey, she wanted to continue talks and “avoid a showdown” with Ankara.

She also praised Turkey for its work with refugees and helping stem the flow of migrants into Europe as part of a deal with the EU.

Merkel noted that there was not a consensus among EU leaders on whether to completely end membership talks with Turkey.

NATO ally Turkey’s drawn-out bid to join the European Union has stalled amid a crackdown on dissent and political opponents of President Recep Tayyip Erdogan. A failed coup attempt in 2016 led to wide-scale purges of the armed forces, state institutions, media and academia.