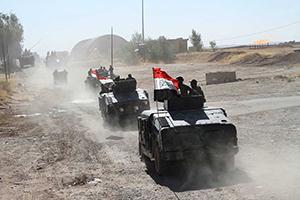 Baghdad and the Kurds go at it, figuring the enemy of my enemy is my enemy.

By Donna Abu-Nasr and Anthony Dipaola

In 2014, when Islamic State rushed into northern Iraq, the region’s rival factions and their international backers turned their attention to defeating the extremists despite old rivalries, sectarian divisions, and differing agendas. Three years later, as Islamic State nears defeat, having been expelled from its stronghold of Mosul and its self-proclaimed capital of Raqqa, many of those old rivalries and unaddressed grievances have burst back to the fore, threatening to further destabilize an already fractious region.

Nowhere is this more apparent than in the disputed city of Kirkuk, where Iraqi federal forces loyal to the central government in Baghdad faced down Kurdish fighters for control over Iraq’s oldest producing oil field, named Baba Gurgur, or Father of Fire, by the Kurds in 1927. The long-standing struggle between the government in Baghdad and the semi-autonomous Kurdistan Regional Government (KRG) reignited on Oct. 16 as Iraqi tanks entered the outskirts of the city of more than 1 million people.

The Iraqi army and federal police, along with Shiite Arab militiamen, encountered little resistance, seizing oil fields, a refinery, and a military base as the Kurds retreated. The town of Sinjar near the Syrian border fell a day later. “The war against the Islamic State is almost over, but that does not mean that the vacuum has been filled,” says Ayham Kamel, head of the Middle East and North Africa department at Eurasia Group Ltd. “This is a complex process where local forces and the central governments will also have a role. It’s a messy affair, and it will invariably be unstable in some areas.”

The Kurds have occupied much of Kirkuk since June 2014, when Iraqi troops retreated from Islamic State militants. Kurdish fighters swept in to claim the province, occupying an area they see as an ancestral home. While Baghdad wants to reassert centralized control over Kirkuk’s oil deposits, the Kurds see the oil as essential to a future independent state. The region around Kirkuk pumps about 10 percent of Iraq’s total crude output of 4.5 million barrels a day, according to estimates compiled by Bloomberg. Most of that oil travels through a Kurdish-operated pipeline that stretches through Turkey to the Mediterranean. “Clearly this fight goes beyond oil to an issue of wider autonomy in the broader region,” says Bassel Khatoun, chief investment officer for Franklin Templeton Investments in the Middle East.

The military offensive comes three weeks after the Kurds voted overwhelmingly in favor of statehood on Sept. 25 in a nonbinding referendum. The vote was denounced by officials in Baghdad—as well as in Turkey, Syria, and Iran, all of which have large Kurdish populations and reasons to be wary of independence for Iraq’s Kurds. The referendum included Kirkuk, even though it lies outside the reach of the KRG. Kirkuk’s inclusion was a “big overreach” by Kurdish leader Masoud Barzani that was inevitably going to elicit a reaction from the government in Baghdad, says Paul Salem, senior vice president of the Middle East Institute in Washington. “What’s actually happening links to the referendum.”

Iraqi Prime Minister Haider al-Abadi, who is trying to shore up his political position ahead of a general election next year, had to “move decisively and quickly to show he’s not just tough on Islamic State but also tough when it comes to Kirkuk on the Kurdish issue,” says Salem. He didn’t want to risk “being the guy who lost Kirkuk. No way could he survive that.”

Turkey, fearing the impact of the referendum on its own Kurdish population, has threatened to shut down the pipeline from Kurdistan to its Mediterranean oil terminal at Ceyhan. The KRG has exported 160 million barrels through Turkey this year, according to Bloomberg tanker tracking. So far the pipeline has remained open, even though Turkey could shut it down at any time. Oil production at some fields around Kirkuk halted during the fighting, cutting northern exports by more than half.

Donald Trump signaled increasing U.S. alarm about the complex situation in northern Iraq, telling reporters in Washington on Oct. 16 that “we’re not taking sides, but we don’t like that they’re clashing.” The U.S. has for decades supported Iraq’s Kurds, first as a bulwark against Saddam Hussein and then as a fighting force against Islamic State. The fall of Saddam in 2003 brought Washington into alliance with successive governments in Baghdad. At the same time, Iraq’s ties to Iran have been growing stronger.

The Iran-backed Popular Mobilization Forces have been fighting alongside the Iraqi army against the Kurds in Kirkuk. “Iran is trying to strengthen its negotiating hand by gathering assets and cards here and there in order to confront the campaign being waged against it by Washington and efforts to limit its expansion in the region,” says Sami Nader, head of the Levant Institute for Strategic Affairs in Beirut. “The war to come after the war against Islamic State is about the distribution of wealth, oil, and areas of influence among the different players,” he says. “Hopefully it will be a cold war and not a hot war.” —With Khalid Al-Ansary, Julian Lee, and Nafeesa Syeed