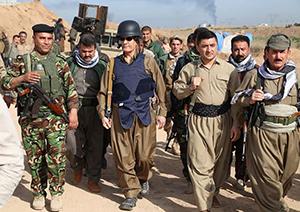 Baghdad and Washington say the invasion has been no big deal. The Kurds beg to differ.

Najmaldin Karim, the Kurdish governor of Kirkuk Province, will not be returning to the city that elected him in 2011 and 2014. It’s too dangerous.

In an interview Wednesday, he told me he fled his home on Tuesday in the early evening and has no plans at the moment to return. “If I go back, my life is in danger,” he told me. “Even the night when all this happened, I had to maneuver carefully to go to safety.”

Karim’s blunt assessment calls into question a few things the Iraqi and U.S. government have been saying about the crisis that began after the Iraqi military this week drove out the Kurdish militias that had secured the city of Kirkuk since 2014.

To start, it suggests many Kurds do not put faith in Iraqi Prime Minister Haider al-Abadi’s recent order for Shiite militias, many of whom are proxies of Iran, to leave the city. Karim told me, “Last night Shiite militias raided Kurdish neighborhoods, and today thousands are leaving. They beat up people. This was all from the Shiite militias. The ones the U.S. led coalition said were not there.” He added: “Abadi claims there were no casualties. We have seen trucks full of dead bodies.”

U.S. officials monitoring the situation in Iraq told me their intelligence assessments are not this grave, and that they cannot confirm widespread casualties. They told me many of the Kurdish statements on Kirkuk have been overblown, but they did acknowledge that some Shiite militias participated in what the Iraqi government had assured the U.S. was originally just a military exercise and not an operation to take back Kirkuk. Before the Iraqi army moved in, Abadi even called reports of the impending invasion “fake news.”

All of this presents a problem for Abadi and his government. On the one hand, the prime minister claims that his army was asserting territorial control on behalf of the country’s elected government. Kurdish fighters have held Kirkuk since 2014, after the Iraqi army collapsed in the face of an Islamic State rampage.

Yet the Iraqi government has now undermined the people of Kirkuk by stripping Karim of his governorship in response to the Kurdistan Regional Government’s decision allow residents of the province to vote in a referendum on declaring independence. This is a particularly tough blow to Kurds, who consider Kirkuk to be their Jerusalem. Saddam Hussein cleansed the Kurds from the city and replaced their population with Sunni Arabs.

The Iraqi army’s incursion into Kirkuk also undermines a longstanding bargain in the new Iraq to settle political disputes without violence. The Kurds voted in a referendum for independence, but they did not declare statehood. The fact that Baghdad has responded with military force sets a dangerous precedent. As Nibras Kazimi, the Iraqi-American author of the Talisman Gate blog, tweeted Wednesday: “What was lost was the gentlemen’s agreement underwriting era of new politics in Baghdad: force will not arbitrate or settle disputes.”

Karim, like many Kurdish leaders, says the Iraqi army acted this week as a cat’s paw of Iran. Not all analysts agree. Michael Rubin, a scholar at the American Enterprise Institute who is currently in Baghdad, told me that Baghdad was forced to act because Kurdish leader Massoud Barzani pushed ahead with the referendum. “Kirkuk is disputed, it is mixed,” said Rubin. “And Barzani decided to shred the status quo. Far from a victory for Iran, the whole episode probably aids U.S. interests because Abadi is far more mindful of the West than many of his competitors. He’s riding high.”

U.S. officials tell me that Abadi was acting in part to head off his main political competition in next year’s national elections, former Prime Minister Nouri al-Maliki. After the Kurdish referendum, Maliki began campaigning on the importance of winning back Kirkuk. U.S. diplomats on the ground in Iraq assessed that Abadi would have faced a no-confidence vote had he not taken some action against the Kurds.

None of this, however, is to say that Iran did not play a role in the events of the last 72 hours. This is where the chief of Iran’s notorious Quds Force, Qassem Soleimani, comes in. On Sunday, Soleimani cut a deal with the widow and nephews of Jalal Talabani, the recently deceased leader of Barzani’s rival party, the Patriotic Union of Kurdistan. As I wrote this month, Talabani aligned with Iran during the intra-Kurdish civil war of the 1990s. The Kurdish Peshmerga units that retreated this week from the Iraqi army and Shiite militias were loyal to Talabani’s party.

“They reached an understanding for Peshmerga commanders to not participate in the fight when Iraqi forces came into Kirkuk,” Karim, who is a senior member of the PUK, said. “The day before the attack, Talibani’s eldest son, Bafel, and his nephew Lahur and his older brother Araz came to Kirkuk and met with Qassem Soleimani’s representative there. He gave an ultimatum, you either give up your positions or we will attack you.”

That incident has roiled the Kurdistan Regional Government. Barzani called the Peshmerga commanders and the Talabani faction that made the deal “traitors.” Leaders of a reform faction inside the Kurdish parliament, known as the Gorran Movement, have begun to question Barzani’s decision to move forward with the referendum vote. Soleimani’s sneaky diplomacy has divided the Kurds just as they came closest to reaching their dream of an independent state.

Meanwhile, the situation for the Kurds keeps getting worse. Iran has closed its border with the Kurdistan region. The Turks are threatening to close the border as well, and have cut off bank access to the government in Erbil. The Trump administration for now has refused to take sides in the dispute.

Karim told me he was ashamed today of the U.S. government. That itself is revealing. Karim held dual U.S. and Iraqi citizenship and for years, was one of the most pro-American politicians in Iraq. Today he is defiant: “We will return to Kirkuk one day, I am not sure when, but we will return.”