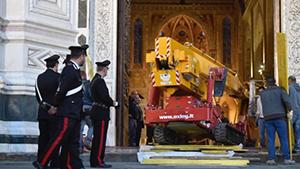 A Spanish tourist in Italy has been killed by a falling stone fragment in one of Florence’s main churches.

He was 52 years old and local newspapers said he lived in Barcelona.

Police have closed the Santa Croce basilica, where the artist Michelangelo, astronomer Galileo and philosopher Machiavelli are buried, to tourist visits until further notice.

A church representative said she was “stunned” and “distraught”, and offered condolences to the victim’s family.

Irene Sanesi, the president of the Opera di Santa Croce, which runs the church, told Reuters news agency that maintenance of the church had been “carried out constantly” in recent years.

It is the main Franciscan church in the city and a major tourist site.