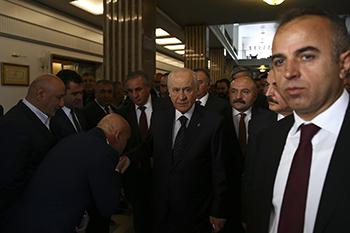 Nationalist Movement Party (MHP) leader Devlet Bahçeli has mockingly suggested that Istanbul football club Galatasaray should “change its name,” after it fielded a team with 11 foreign players in a Turkish Super League match.

“Galatasaray should change its name. Turkey’s population is 80 million, so we could surely find eleven people to go onto the pitch,” Bahçeli told reporters in Ankara on Oct. 19.

Galatasaray extended its lead to six points over its closest rivals at the top of the league after beating Konyaspor 2-0 away from home on Oct. 14. However, coach Igor Tudor raised eyebrows by fielding 11 foreign players, a first in Turkish league history.

The Turkish Football Federation (TFF) decided to remove the limit on foreign players in Turkish teams in 2015, launching a debate in the country on the future of Turkish players.

“The eagles are flying high,” he said, while also praising Turkey’s amputee football team, which defeated England 2-1 late on Oct. 10 to become champions of Europe in front of 40,000 spectators in Istanbul.

“We admire them as a nation. The TFF and the Sports Ministry should support them,” Bahçeli added.

Lavrov: Moscow Will Definitely Respond to Any Sanctions Imposed by the US