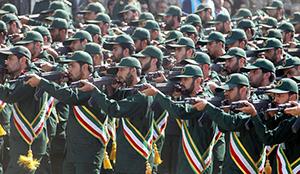 The missile program will be expanded “at greater speed,” the Guards said in a statement carried by the Tasnim news agency on Thursday. Trump’s “hostile stance” toward Iran reflects the inability of the U.S. and Israel to shift the balance of power in the region, and their “anger” at the Guards’ role, it said.

The statement comes after Trump called Iran a “rogue” state in a speech on Friday that formalized his administration’s more aggressive approach. He refused to certify Iran’s compliance with the landmark 2015 nuclear accord, even as all other parties to the deal maintain it is abiding by the terms. He also argued that the accord, reached under his predecessor, wasn’t serving national security interests and that Iran had become bolder since it took effect.

The Guards comments are “very much expected and in line with the general rhetoric out of Iran,” said Aniseh Bassiri Tabrizi, a research fellow at the Royal United Services Institute in London. There is now an alignment “between all the different centers of power both in terms of what to do with the nuclear deal, and Iran’s defense program and broader activities in region,” she said.

Iran’s Supreme Leader Ayatollah Ali Khamenei, the highest authority in the country, said on Wednesday that while his country would not move first to abandon the nuclear agreement, it would “tear it to pieces” if the other side “rips it.” While Khamenei has at times criticized the deal for failing to deliver meaningful improvements in the lives of ordinary Iranians, his comments this week reflected those of its architect, moderate President Hassan Rouhani.

Trump has repeatedly criticized the accord for not addressing Iran’s missile program or Tehran’s growing influence in the Middle East. Iran says its missile development is legitimate and solely defensive in nature, and has justified it by pointing to U.S. military involvement in Iraq and Afghanistan — as well as sales of U.S. military equipment to Israel and Saudi Arabia.

In “reviving its threats,” the U.S. has reminded Iran of the importance of defending the nation, Guards commander Mohammad Ali Jafari said in a separate statement reported by Tasnim.

Iran has always stated its missile program is for deterrence, said Bassiri. “Because of the threatening rhetoric and steps taken by the U.S. towards Iran, it has even more of reason to say so.”