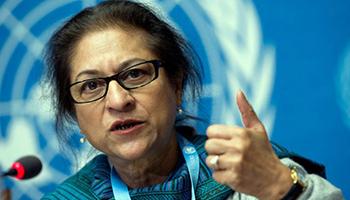 Renowned Pakistani human rights lawyer and social activist Asma Jilani Jahangir, who co-founded and chaired the Human Rights Commission of Pakistan and is also the lawyer of the Kaçmaz family, who were abducted in Pakistan and illegally deported to Turkey, slammed the Pakistani government for handing the family over to Turkey, where they are now jailed.

According to a Stockholm Center for Peace (SCF) report on Thursday, Jahangir accused the Pakistani government of disobeying court orders that banned the deportation of former PakTurk School director Mesut Kaçmaz, his wife Meral Kaçmaz and daughters Huda Nur (17) and Fatma Huma (15), who were abducted from their home at midnight in Lahore on Sept. 27 and were deported illegally to Turkey by Pakistani authorities on Oct. 14 over their alleged links to the faith-based Gülen movement, which the Turkish government blames for a failed coup last year.

“I mean: Is this a country or a forest? Is it an unowned realm? Because no one is regardful of the court here, they deliver the people they want to world dictators, as they have done before,” said Jahangir during a press conference in Lahore on Wednesday.

According to information provided by friends of the family, Mesut Kaçmaz and his wife Meral Kaçmaz were blindfolded and boarded an unmarked flight from Islamabad for İstanbul on the morning of Oct. 14 despite a habeas corpus decision by the Lahore High Court. They were then transferred to Ankara for interrogation.

While Mesut Kaçmaz and his wife Meral were put in pretrial detention after interrogation, it was learned that the teenage daughters of the Kaçmaz couple have not been detained and are reportedly staying with a relative in İstanbul.

The four members of the Kaçmaz family have been living in Pakistan under the protection of the UNHCR.

Jahangir, who is widely known for playing a prominent role in the Lawyers Movement and serves as a trustee for the International Crisis Group, said: “If the foreign and interior ministries of Pakistan do not know anything about the deportation, then who is that third person who sits here and orders everything? If there is a third party, then he must be sitting there listening to us. We also know who he is, and we will not let him go.”

Pakistani authorities had kept the place of detention secret, and therefore the Kaçmaz family had not been seen by anyone including their lawyers. The Pakistani government has not given any explanation.

According to Pakistani media reports, there were Turkish police officers on the plane and the victims were handed over to them. However, the relevant Pakistani organizations are still silent about their deportation from Pakistan. Sources in the Pakistani Interior Ministry and Federal Investigation Agency (FIA) told The Express Tribune daily that there is no record of any such deportation in the Integrated Border Management System (IBMS), installed at airports to check the arrival and departure of every traveler.

Jahangir stated on Wednesday that “as we have already mentioned, even though the names of the kidnapped Turkish family members are added to the Exit Control List [ECL] and there are court orders to not be deported – here are the passports: this is the passport of the spouse, and these are the girls – though we have all the passports, even though there was a court order and their names were entered in the ECL, they were deported. The family was first held in Lahore, then taken to Islamabad. A private plane from Turkey came to the airport, the Turkish police stepped into Pakistan, dragged the family members into the airport and took them away.”

“This is just because there is a friendship between the leaders there and here. So we will just continue to deliver people here like a sacrificial sheep, is that so? This court today ordered the authorities and asked for the number and list of all aircraft landing in Islamabad and departing from Islamabad. The judge also ordered the CCTV footage from the airport, along with records of which private plane landed at the airport, and said he wanted to see how the family was taken.”

Jahangir has described the cruelty done to the Kaçmaz family and said that “the passengers called and told us how the girls were dragged, how they screamed and how they were brutally taken to the plane. As soon as they reached there they were kept in jail. Right now, both the wife and the husband are in jail. They were tortured and beaten at the airport. The court did not ignore the elaboration that the family was kidnapped by the Punjab Anti-terror Department according to the information the court received and urged the senior high-ranking undersecretary of the team that we complained, to testify. We will be followers until the end of this story, we will go down to the last detail and find out who is the issuer.”

Jahangir concluded that “this has to be disclosed. At least there should be a name. What you’ve specified is a new rumor, and these kinds of lies don’t work anymore. We will get down to the root of this lie.”

Mesut Kaçmaz worked as the principal of the PakTurk Clifton Boys School. The school has so far produced hundreds of graduates and represented the country successfully at international science olympiads. Back in 2008, The New York Times covered the constructive role of the PakTurk schools and their achievements, quoting Mr. Kaçmaz.

The witch-hunt launched in 2013 in Turkey targeting alleged followers of the Hizmet movement in the wake of a massive corruption and bribery scandal of Turkish government ministers and their family members on Dec. 17-25, 2013 has even affected Pakistan. Turkish President Recep Tayyip Erdoğan put the pressure on the Pakistani government to close the educational and cultural institutions alleged to be affiliated with the movement and to deport Turkish citizens working at these institutions.

In November 2016, the Pakistani government did not extend the visas of these teachers and their families and ordered them to leave the country within three days. The teachers went to court and objected to the decision. During this period, they also applied to the UNHCR and were issued asylum seeker certificates, placing them under the UN protection.

In a similar incident in Malaysia, some Turkish educators and entrepreneurs were intimidated, abducted and illegally handed over to Turkey.

Turkey survived a controversial military coup attempt on July 15, 2016 that killed 249 people. Immediately after the putsch the ruling Justice and Development Party (AKP) government along with President Erdoğan pinned the blame on the Hizmet movement.

Turkey’s Justice Ministry announced on July 13 that 50,510 people have been arrested and 169,013 have been the subject of legal proceedings on coup charges since the failed coup. Turkish government has also suspended or dismissed more than 150,000  judges, teachers, police and civil servants after the coup attempt.