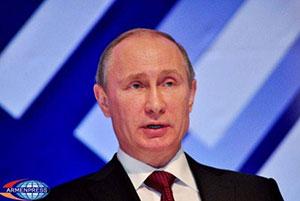 Sochi, SANA-Russian President Vladimir Putin affirmed on Thursday that his country stands by the Syrian legitimate government in its war against terrorism in light of the international law.

“Russia confronts terrorism beside the Syrian legitimate government and other states in the region, based on the international laws,” President Putin added in a speech at Valdai Discussion Club held in Sochi.

He affirmed that Russia works in an accurate and balanced way with all participants in the settlement process of Syria, adding that the Russian efforts were positive and professional that came in the needed time.

Putin added that the success of de-escalation zones needs the participation of other countries that have an impact on the crisis in Syria.

The President expected that following the launch of de-escalation zones’ work in Syria; next period will witness the convening of a Syrian conference to complete the national reconciliation with a support of the guarantor states.