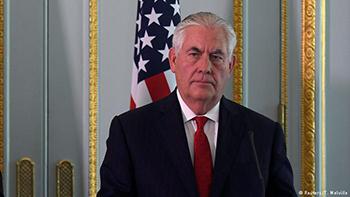 Secretary of State Rex Tillerson has little hope that a Saudi Arabia-led bloc’s standoff with Qatar will end anytime soon, blaming the four countries lined up against the emirate for a lack of progress and casting doubts on U.S. efforts to mediate the crisis.

“There seems to be a real unwillingness on the part of some of the parties to want to engage,” Tillerson said in an interview Thursday in Washington. “It’s up to the leadership of the quartet when they want to engage with Qatar because Qatar has been very clear — they’re ready to engage.”

Tillerson made the comment days before he embarks on a trip to the region, including stops in Saudi Arabia and Qatar, in a renewed push to resolve the dispute. The crisis flared in June when Saudi Arabia and three other U.S. allies in the region — the United Arab Emirates, Egypt and Bahrain — severed diplomatic and transport links with the gas-rich state over accusations that it supports terrorist groups. Qatari officials deny the charges.

Tillerson, the former CEO of Exxon Mobil Corp., last visited the region in July. At the time, the top U.S. diplomat said he was hopeful that he could help resolve the dispute, which has been officially mediated by Kuwait. Tillerson’s remarks Thursday suggested that attitude has now changed.

“I do not have a lot of expectations for it being resolved anytime soon,” Tillerson said. He declined to say which country bears the most responsibility for the lack of progress.

In September, President Donald Trump said he would be willing to serve as a mediator “right here in the White House” if the issue wasn’t solved soon.

“I have a very strong feeling that it will be solved, and pretty quickly,” Trump predicted at the time.

In the interview, Tillerson emphasized that the main responsibility for a way out of the crisis now rests with the countries at the center of it.

“Our role is to try to ensure lines of communication are as open as we can help them be, that messages not be misunderstood,” Tillerson said. “We’re ready to play any role we can to bring them together but at this point it really is now up to the leadership of those countries.”