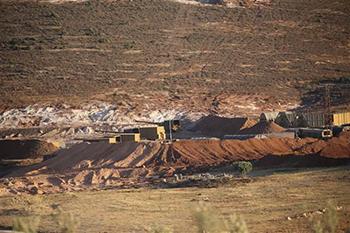 Turkey is building a bulletproof shield near its southern border as part of an operation launched in Syria’s largely jihadist-controlled northwestern province of Idlib.

The accordion shield is being constructed in the Reyhanlı district of the southern province of Hatay, as heavy machinery belonging to the army continued to dig for another day, state-run Anadolu Agency reported on Oct. 18.

President Recep Tayyip Erdoğan announced on Oct. 7 the start of a new military operation by Free Syrian Army (FSA) militants backed by the Turkish army in Idlib, which is largely controlled by Hayat Tahrir al-Sham (HTS), spearheaded by a former al-Qaeda affiliate that changed its name last year from the al-Nusra Front.

The operation is part of efforts by Turkey, along with Russia and Iran, to set up a de-escalation zone in line with accords in the Astana peace talks aimed at ending the Syrian war. They agreed on four such ceasefire zones in Syria as a prelude to negotiations.

HTS is not party to the deal for the safe zone in the province, one of four such de-escalation zones nationwide.

Ousting HTS forces from the area will be needed to allow the arrival of Iranian, Russian and Turkish forces to implement the de-escalation zone.

The first convoy of the Turkish Armed Forces (TSK) crossed into Idlib late on Oct. 12.

Since the start of the operation, the Turkish army has been sending military reinforcements to the border, and increased army activity has been visible.

According to Anadolu Agency, howitzers deployed at the border are surrounded by three-meter-deep soil.

Meanwhile, a motorcade consisting of 10 armored personnel carriers and military vehicles arrived at the border area on Oct. 18.

Elsewhere, Kazakhstan said yesterday that fresh talks on the Syria conflict will be held in Astana at the end of the month.

The two-day meeting, which will take place on Oct. 30 and 31 in the Kazakh capital, will be the seventh round of negotiations this year.

“The guarantor states of the cessation of hostilities have agreed that the seventh round of high-level talks on Syria as part of the Astana process will be held on October 30-31,” the Kazakh Foreign Ministry said in a statement yesterday.