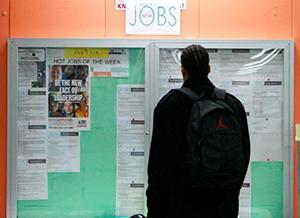 WASHINGTON (Reuters) – The number of Americans filing for unemployment benefits dropped to its lowest level in more than 44-1/2 years last week, pointing to a rebound in job growth after a hurricane-related decline in employment in September.

The labor market outlook was also bolstered by another report on Thursday showing a measure of factory employment in the mid-Atlantic region racing to a record high in October. The signs of labor market strength could cement expectations that the Federal Reserve will raise interest rates in December.

“It doesn’t take one hundred PhD economists at the Fed to figure out that the labor market is on the tight side of normal,” said John Ryding, chief economist at RDQ Economics in New York. “At this point, we would expect a sharp bounce-back in employment growth in October.”

Initial claims for state unemployment benefits fell 22,000 to a seasonally adjusted 222,000 for the week ended Oct. 14, the lowest level since March 1973, the Labor Department said. But the decrease in claims, which was the largest since April, was probably exaggerated by the Columbus Day holiday on Monday.

Claims are declining as the impact of Hurricanes Harvey and Irma washes out of the data. The hurricanes, which lashed Texas, Florida and the Virgin Islands, boosted claims to an almost three-year high of 298,000 at the start of September.

Nonfarm payrolls dropped by 33,000 jobs in September as Hurricanes Irma and Harvey left more than 100,000 restaurant workers temporarily unemployed. The Virgin Islands and Puerto Rico are not included in nonfarm payrolls.

Economists had forecast claims slipping to 240,000 in the latest week. The dollar briefly pared losses against a basket of currencies after the data. Stocks on Wall Street fell as investors booked profits after a recent rally that lifted shares to record highs. Prices for U.S. Treasuries rose.

Last week marked the 137th consecutive week that claims remained below the 300,000 threshold, which is associated with a robust labor market. That is the longest such stretch since 1970, when the labor market was smaller.

Improvements in the labor market have been largely due to a recovery that started during former President Barack Obama’s first term. While U.S. stocks have risen in anticipation of President Donald Trump’s tax plans, the administration has yet to enact any significant new economic policies.

The labor market is near full employment, with the jobless rate at a more than 16-1/2-year low of 4.2 percent. Tightening labor market conditions likely keep the Fed on track to raise interest in December for a third time this year, even as inflation remains moderate.

The four-week moving average of initial claims, considered a better measure of labor market trends as it irons out week-to-week volatility, fell 9,500 to 248,250 last week.

The claims data covered the survey week for October nonfarm payrolls. The four-week average of claims fell 20,500 between the September and October survey periods, supporting views of a rebound in job growth this month.

In a separate report on Thursday, the Philadelphia Fed said its measure of factory employment in the mid-Atlantic region soared 24 points to a record high reading of 30.6 in October.

The average workweek index also increased 8 points to a reading of 19.4. It said no firms reported decreases in employment this month. The robust labor market readings helped to lift the Philadelphia Fed’s current manufacturing activity index four points to a five-month high of 27.9 in October, offsetting declines in new orders and shipments measures.

Also underscoring labor market strength, the claims report showed the number of people still receiving benefits after an initial week of aid decreased 16,000 to 1.89 million in the week ended Oct. 7, the lowest level since December 1973.

The four-week moving average of so-called continuing claims fell 22,750 to 1.91 million, the lowest level since January 1974.