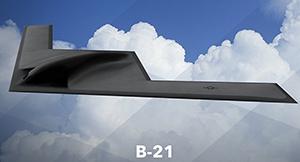 A new US Air Force under secretary who once worked side-by-side with US Senator John McCain to pressure the military to disclose more information about the cost of the next-generation B-21 Raider is now delaying just that disclosure.

The issue about the program’s cost is amplified by acquisitions inefficiencies exemplified by the USS Gerald Ford supercarrier ($2.4 billion, or about 22 percent, over budget) and the F-35 joint strike fighter program ($163 billion over budget and seven years behind schedule).

It will be “some time” before the service coughs up records on the secretive B-21, Air Force Undersecretary Matthew Donovan said October 12, Defense News reported Wednesday. One major concern in the military, and in Washington generally, is that releasing financial details about the program might allow adversaries to learn too much about it.

Donovan, who has spent his life around the US Air Force and flew more than 2,900 flight hours in the F-15C Eagle and F-5E Tiger before retiring as a colonel in 2008, explained to the outlet, “it’s funny because they knew I was the guy that was always pushing on” releasing more B-21 information “from the Senate side” when Donovan was a policy director for the Senate Armed Forces Committee just last year.

Northrop Grumman, a defense firm headquartered in Virginia, won a contract to produce the B-21 in 2015 but the contract’s value remains secret.

The Republican senator from Arizona suffering from terminal brain cancer called on the Air Force to lift the “veil of secrecy” on the raider program. “It’s understandable to keep the B-21 specific warfighting capabilities classified, but it’s difficult to understand why you should keep other aspects of the program under a veil of secrecy,” McCain told service officials during a June 6 Senate hearing.

Top US Air Force brass, including Donovan’s bosses Secretary Heather Wilson and Chief of Staff David Goldfein, remain reluctant to share information about the program’s details; however, “if conditions change as we get farther along in the program, I think the chief and the secretary will certainly consider that and release as much as they can,” he said.