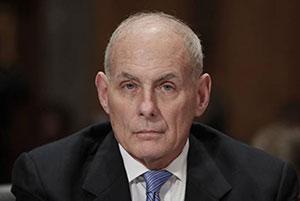 The White House chief of staff has launched an impassioned attack on a “selfish” congresswoman who said President Trump made a war widow cry.

General John Kelly said he was “broken-hearted” by the Democrat’s criticism of the president’s condolence call to Sgt La David Johnson’s wife.

Sgt Johnson was one of four killed in Niger by Islamist militants this month.

Gen Kelly also said he did not receive a call from President Barack Obama when his son died in Afghanistan in 2010.

The chief of staff, a former Marine Corps general, said in the White House briefing room that Representative Frederica Wilson was “an empty barrel”.

The Florida Democrat said on Wednesday that she had overheard Mr Trump telling bereaved Myeshia Johnson of her slain husband: “He knew what he was signing up for, but I guess it hurts anyway.”

Ms Wilson said the president’s alleged remarks, shortly before Sgt Johnson’s coffin arrived by aircraft in his home city of Miami, made Ms Johnson break down in tears.

President Trump said the congresswoman had “totally fabricated” the comments.

On Thursday, Gen Kelly said he was so “stunned” by Ms Wilson’s attack that he spent more than an hour walking among soldiers’ graves at Arlington National Cemetery, just outside Washington.

The chief of staff said he had advised the president not to call the loved ones of the four American servicemen killed in Niger, telling him: “There’s nothing you can do to lighten the burden on these families.”

Gen Kelly described such a task as “the most difficult thing you can imagine”.

“There is no perfect way to make that phone call,” he added.

He also discussed the death of his own son, Robert Kelly, a 29-year-old Marine first lieutenant who died when he stepped on an Afghan landmine.

Gen Kelly said: “He [President Trump] asked me about previous presidents. And I said, ‘I can tell you that President Obama, who was my commander-in-chief when I was on active duty, did not call my family.’

“That was not a criticism. That was just to simply say, I don’t believe that President Obama called. That’s not a negative thing.

The controversy began on Monday when a reporter asked Mr Trump at the White House why he had still not called the families of the four soldiers killed in the fatal ambush in Niger on 4 October.

The president provoked outrage by suggesting that his predecessor, Barack Obama, and other former US presidents did not call the relatives of dead service members.

On Tuesday, Mr Trump ratcheted up the row by stating that President Obama did not call Gen Kelly’s family.

Mr Kelly also said the Pentagon was investigating the details of the deaths of Sgt Johnson and the other servicemen in the west African country.

But Senator John McCain, the chairman of the Senate Armed Services Committee, said he was not being given any details, adding that he could issue a subpoena for the information.

Asked by reporters what information he still lacked, he said “everything”.

And asked if the White house had been forthcoming, he responded: “Of course not.”