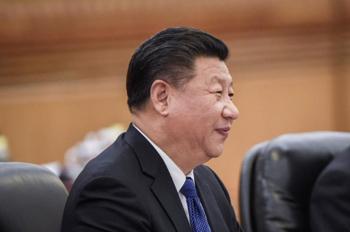 Chinese president Xi Jinping is to be given his own political theory, according to state news agency Xinhua.

It will be known as “Xi Jinping Thought” and has 14 principles, the agency says.

The theory is likely to be incorporated into the constitution of the ruling Communist Party, which would strengthen Xi Jinping’s position at the top.

He would be the first leader to lend his name to a political theory since Deng Xiaoping, who retired in 1989.

The only other leader to do so was Mao Zedong.

Xinhua says the Communist Party of China has created “Xi Jinping Thought on Socialism with Chinese Characteristics for a New Era”.

The report appeared in English but has yet to be confirmed in Chinese-language state media.

It quotes senior party officials such as Zhang Dejiang who said “the thought is the biggest highlight of the 19th National Congress” and a “historic contribution to the Party’s development”.

The BBC’s China Editor Carrie Gracie says it is very unlikely that they would make these comments, or that these comments would be reported in Xinhua, without representing the authoritative view of the party.

But the remote possibility does still exist that Xi Jinping Thought will not be in the constitutional amendments, our correspondent adds.

As yet, we have only have a vague sense of what “Xi Jinping Thought” is all about.

Xinhua describes it as socialism with Chinese characteristics for a new era: a nice slogan but hard to pin down.

In some respects, the fundamentals of the new theory are unimportant. Attaching Xi Jinping’s name to a political philosophy is as much about symbolism as substance.

The two previous Chinese leaders had their theories – Hu Jintao was known for his “scientific outlook on development” and Jiang Zemin had “the theory of three represents”.

It would have been odd if Xi Jinping had not got his own.

But Mr Xi appears to have gone further than his two immediate predecessors. Neither Mr Hu nor Mr Jiang had their names linked to their theories.

That privilege has previously gone only to Mao Zedong and Deng Xiaoping, communist China’s two most revered leaders. Does this mean Mr Xi’s power now rivals theirs?

Formally, “Xi Jinping Thought” still needs to be approved at the Communist Party congress before it is incorporated into the party’s constitution.

The congress, which takes place once every five years, will finish on Tuesday. More than 2,000 delegates are attending the event, which is taking place under tight security.