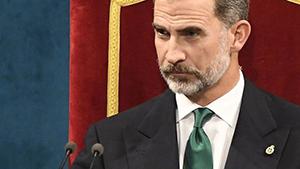 Spain’s King Felipe VI has said Catalonia “is and will remain” an essential part of the country.

It is his second intervention in the Catalonia secession crisis.

He told an awards ceremony in the northern city of Oviedo that the Catalan government was causing a rift and Spain would solve the problem through democratic institutions.

Catalonia’s leader has threatened to declare independence, and Madrid is making plans to impose direct rule.

According to the opposition Socialists – who support the central government’s stand against Catalan independence – the plans include elections in Catalonia in January.

Prime Minister Mariano Rajoy will announce the full set of measures on Saturday, two days after a deadline for Catalonia’s autonomous government to abandon its independence bid.

The central government has said it will trigger Article 155 of the constitution, which allows it to impose direct rule in a crisis, for the first time.

Other moves may include taking control of Catalonia’s regional police force.

Article 155 does not give the government the power to fully suspend autonomy.

A referendum, regarded as illegal by Spain, was held in Catalonia on 1 October.

Of the 43% of Catalans who reportedly voted, 90% were in favour of independence. Most anti-independence voters boycotted the ballot.

King Felipe previously said Catalan President Carles Puigdemont and other separatist leaders who organised the referendum had “broken the democratic principles of the rule of law” and showed “disrespect to the powers of the state”.

While the dissolution of Catalonia’s parliament and the holding of snap regional elections may appear to offer a way of defusing today’s state of extreme tension, there are plenty of reasons to doubt that such a strategy would provide a clear solution to the crisis.

The far-left CUP has suggested that it would boycott any election imposed on the region. Other pro-independence forces might do the same. Massive street protests against any form of direct rule from Madrid can also be expected.

And what are the potential consequences of forcing an election on Catalonia?

Mr Puigdemont has promised to call a formal vote on independence in Catalonia’s parliament if Article 155 is invoked. If such a declaration were approved, the pro-independence forces could style the ballot as the election of a constituent assembly for a new republic, the next stage laid down in the secessionists’ road map.

Assuming the participation of all parties, voters would be bound to interpret the election as a de facto plebiscite on independence. If a separatist majority emerged once again, it is hard to see how the conflict could be considered closed.