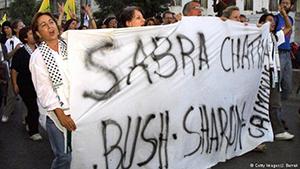 The court ruling comes more than 35 years after President-elect Bashir Gemayel was killed by a massive bomb blast. Bashir, a Christian, had the backing of Israel and was battling Palestinian and Muslim factions.

Lebanon’s top court sentenced to death at least one Syrian nationalist for the 1982 assassination of President-elect Bashir Gemayel.

Habib Shartouni, a member of the Syrian Socialist Nationalist Party (SSNP), was sentenced in absentia but admitted his part in the attack in the 1980s. He spent eight years in prison before escaping in 1990.

Lebanon’s al-Akhbar newspaper quoted Shartouni on Thursday saying the timing of his trial was political and that he had lived in Syria from 1994 to 2004.

He did not say where he lives now.

Gemayel was killed less than a month after being elected president – and just two weeks from taking office – when a massive bomb tore through the right-wing Christian Phalange Party headquarters in east Beirut on September 14. At least 23 of his supporters were also killed in the blast, with Reuters reporting that 32 others had died.

In addition to Shartouni, fellow SSNP member Nabil Farah al-Alam was also sentenced, in absentia, to death for his role in the bomb attack, according to the Associated Press.

Gemayel was head of the Lebanese Forces Christian militia, which was fighting leftist Muslim and Palestinian factions. His candidacy was backed by Israel.

The general had agreed to start discussing diplomatic ties with Israel at a time when Israeli forces were in Lebanon, during one of the bloodiest phases of Lebanon’s 15-year civil war.

Supporters of both Shartouni and Gemayel have protested outside the court during the hearings.

Gemayel’s family remains one of the most important in Lebanese politics. His son Samy is currently president of the Kataeb party that was founded by his grandfather, Pierre Gemayel, who was a parliamentary power broker for nearly 25 years, until his death in 1984.

Gemayel also had a nephew named Pierre, who was likewise assassinated in 2006.

The Lebanese Forces militia subsequently became a different political party, and is led by one of its commanders, Samir Geagea.