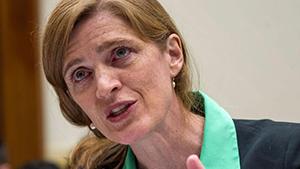 Congressional testimony by President Barack Obama’s former ambassador to the United Nations, Samantha Power, about the “unmasking” of U.S. citizens’ names she requested in hundreds of foreign intelligence intercepts by the National Security Agency, has raised new questions about how the sensitive information was ordered up, and subsequently handled.

Power spoke to the House Intelligence Committee on Oct. 13 behind closed doors, and what she said is still cloaked in secrecy. But on Oct. 17, House Oversight and Government Reform Committee Chairman Trey Gowdy, who also sits on the Intelligence Committee, told Fox News: “Her testimony is they [the unmasking requests] may be under my name, but I did not make those requests.” Gowdy said little else about the session.

The sheer volume of such requests submitted to U.S. intelligence authorities in her name was already unusual. But if she did not initiate them, then who did, and why? Was the resulting information delivered to Power, as the normal protocols of handling such constitutionally-protected information require? Was she even aware of the gush of highly sensitive and secret information solicited under her name?

So far, Power has not responded to queries on those issues, which were emailed by Fox News to her Harvard University office on Oct. 19.

According to former U.S. Ambassador to the United Nations John Bolton, a Fox News contributor, if someone submitted unmasking requests in Power’s name without her knowledge or consent, it would be “potentially criminal.”

“Unmasking” involves asking U.S. intelligence authorities to fill in the redacted names of U.S. citizens whose comments are caught up in the NSA’s foreign intelligence intercepts, which are routinely removed to protect their Fourth Amendment rights. Such revelations are supposed to be relatively rare, clearly justified and tightly controlled.

The issue flared, however, after the unmasked name of the Trump Administration’s disgraced former National Security Advisor, Michael Flynn, was leaked in connection with conversations with Russian Ambassador to the U.S. Sergey Kislyak.

Concerned at the leakage of unmasked names, House Intelligence Committee Chairman Devin Nunes has been delving into what happened, and how to prevent abuses.

Power’s role in the unmasking affair was highlighted by Nunes in a July 27 letter to Director of National Intelligence Daniel Coats. In the letter, the House committee chairman cited an unnamed Obama Administration official for the high volume of their unmasking requests, noting that this official’s position had “no apparent intelligence-related function.” The official was widely believed to be Power, something she never denied.

In August, Nunes wrote to the head of the National Security Agency, Adm. Michael Rogers, asking for the total number of unmasking requests made by former deputy national security adviser, Ben Rhodes, during the 13 months prior to President Trump’s inauguration.

With the exception of career-CIA officer Brennan, the other persons are a group of politically-appointed Obama loyalists, all serving at various times during his administration on the National Security Council.

Rhodes was on the NSC as a deputy national security advisor throughout Obama’s two terms, from 2009-2017. He was profiled in the New York Times Magazine last year as Obama’s foreign-policy guru, especially on Iran. He told the Times, “I don’t know anymore where I begin and Obama ends.”

Rice served during Obama’s first term, from 2009-2013, as his ambassador to the U.N., a post Obama designated as cabinet level. During Obama’s second term, Rice served as head of the NSC, with Rhodes as one of her deputies.

Power, a former journalist, served during Obama’s first term on the NSC, designing and running a body called the Atrocities Prevention Board. She kept a seat on the NSC during Obama’s second term, while also replacing Rice from 2013-2017 as U.N. ambassador.

Interestingly enough, for purposes of congressional inquiries into the unmasking issue, all three of the politically appointed former Obama administration officials — Power, Rhodes and Rice — have something else in common: lawyers who served alongside them in the Obama White House, adding another layer of insider complexity to the issue.

In July, for a meeting with investigators from the Senate Intelligence Committee, Power was represented by David Pressman, a former Obama administration official, who was described in news accounts at the time simply as her attorney. At the time, Pressman declared, among other things, that “any insinuation that Ambassador Power was involved in leaking classified information is absolutely false.”

As reported by Fox News on Sept. 12, Pressman’s ties to Power were closer and rather more extensive than simply legal representation. He had worked intensively with Power during most of the interval under scrutiny in the unmasking probe.

Until last November, Pressman was one of Power’s closest associates at the U.S. mission to the U.N., sharing an office suite with Power and serving for two years, from 2014-2016, as her alternate, with the rank of ambassador, on the U.N. Security Council. In that position, he had access to daily intelligence briefings, and dealt with such sensitive issues as the Middle East and Russian aggression in Ukraine.

When Pressman resigned from the administration the week before the election, to go into private practice, Power praised him as having been her “partner.”

It was a partnership that arrived at the U.S. mission by way of the White House, where Pressman and Power (and Ben Rhodes) overlapped on the National Security Council, during Obama’s first term. In 2011, Pressman and Power coauthored an article for the White House blog about Obama’s creation under the NSC of the Atrocities Prevention Board, which Power chaired, and on which Pressman also had a seat.

The personal connections dated back even earlier. Power, in the acknowledgments to her 2008 book “Chasing the Flame,” praised Rhodes for his daily support and listed Pressman among her “close friends.”

As Fox News noted, congressional investigators might usefully have tapped Pressman for insights into the inner workings of the U.S. mission during the period of the many unmaskings under Power’s name, had Pressman not been acting as Power’s attorney.

Now, however, Pressman has apparently stepped aside, at least for the time being, from that role. A spokesperson for Pressman’s law firm, Boies Schiller Flexner LLP, told Fox that “Boies Schiller Flexner LLP continues to represent Ambassador Power,” but added: “David Pressman was one of the lawyers that represented the Ambassador for her Senate appearance; other lawyers at the firm are representing the Ambassador for the purpose of her House appearance.”

Boies Schiller Flexner did not respond to queries about the identities of the “other lawyers” who are now representing Power. But when Power appeared before the House Intelligence Committee on Oct. 13, the lawyer representing her was Michael Gottlieb, from Boies Schiller’s Washington office.

As it happens, Gottlieb is another veteran of the Obama White House, where he served during Obama’s first term as an associate counsel, leaving in 2013.

No additional information has surfaced on who at Boies Schiller might also be representing Power. But if service in the Obama administration is a qualifying credential, the firm has a pool of former Obama administration legal talent on tap, including at least three other former associate counsels to Obama.

Susan Rice has been represented, via a different law firm, by another former star of the Obama administration’s legal firmament, former White House Counsel Kathryn Ruemmler. Now a partner at Latham & Watkins LLP, Ruemmler is described on the firm’s web site as having been “President Obama’s chief lawyer” and “one of his most senior advisers.” She worked for almost six years in the Obama administration. First, she worked at the Department of Justice and then from 2011-2014 she worked at the White House, attending high-level conclaves along with officials such as Power and Rice.

When Ruemmler left the administration in 2014, the New York Times profiled her as someone who had “held powerful sway” at the Obama White House. Among other things, the Times reported that Ruemmler “took a hard line in internal debates about keeping executive branch documents secret” — a line that “contributed to Mr. Obama’s transition from promising greater transparency to being criticized even by his own allies for excessive secrecy.”

Claudia Rosett is a foreign policy fellow with the Independent Women’s Forum and blogs at PJMedia.com. George Russell is editor-at-large of Fox News.

Claudia Rosett is journalist-in-residence at the Foundation for Defense of Democracies.

George Russell is editor-at-large of Fox News and can be found on Twitter: @GeorgeRussell or on Facebook.com/GeorgeRussell