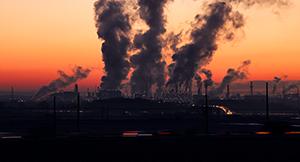 New research carried out by The Lancet Commission on Pollution and Health showed that pollution’s harmful impact on people’s health, the environment and our planet was responsible for one in six deaths worldwide in 2015.

The report, published Thursday in The Lancet, says that the deaths of approximately 9 million people worldwide in 2015 were linked to some form of pollution — air, water, soil, chemical or occupational pollution.

Aiming to raise awareness of the daunting consequences of environmental contamination caused by human activity and to push global authorities to take action, the researchers analyzed mortality rates in different parts of the world and found that deaths from pollution substantially exceeded many other causes, such as alcohol or malnutrition, which were responsible for 2 million and 1 million deaths, respectively.

Various kinds of airborne pollution — smog from power plants, factories or vehicles — proved to be the most fatal form, accounting for 6.5 million deaths in 2015. Contaminated water caused 1.8 million people that year to die, and according to the report is the second largest contributor to premature deaths.

“I was shocked, when we started running the numbers, to see what a substantial impact it had on health,” said Richard Fuller, co-chairman of the commission, according to Bloomberg.

An overwhelming majority of pollution-related deaths — 92 percent — occur in less-developed countries. One of every four such deaths occur in countries experiencing rapid industrialization such as India, Pakistan, China, Bangladesh, Madagascar and Kenya.

“Pollution disproportionately impacts the poor and the vulnerable,” said Olusoji Adeyi, director of the health, nutrition and population global practice at the World Bank Group, adding that children face the highest risks. “It is important to translate awareness into action at the local, national and global levels.”