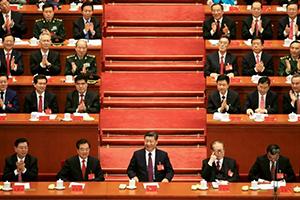 WASHINGTON (Reuters) – U.S. President Donald Trump is expected to pressure China’s president when they meet next month in Beijing to do more to rein in North Korea out of a belief that Xi Jinping’s consolidation of power should give him more authority to do so.

Trump leaves Nov. 3 on a trip that will take him to Japan, South Korea, China, Vietnam and the Philippines. It will be his first tour of Asia since taking power in January and one with a major priority: Preventing the standoff with North Korea from spiraling out of control.

Xi is immersed in a Communist Party Congress expected to culminate in him consolidating his control and potentially retaining power beyond 2022, when the next congress takes place.

Trump believes that Xi should have even more leverage to work on the North Korea problem.

“The president’s view is you have even less of an excuse now,” said one official. “He’s not going to step lightly.”

Trump wants to gain some serious cooperation from China to persuade Pyongyang to either change its mind or help deprive it of so much resources that it has no choice but to alter its behavior, the official said.

Trump has heaped praise on Xi in recent weeks in hopes of gaining Chinese cooperation and has held back from major punitive trade measures.

In an interview with Fox Business Network’s Maria Bartiromo, Trump said he wants to “keep things very, very low key” with Xi until the Chinese leader emerges from the party congress.

“I believe he’s got the power to do something very significant with respect to North Korea. We’ll see what happens. Now with that being said, we’re prepared for anything. We are so prepared, like you wouldn’t believe,” Trump said in the interview, to air on Sunday.

Trump has traded bitter insults with North Korean leader Kim Jong Un, using his speech at the United Nations General Assembly last month to dismiss Kim as a “rocket man” on a suicide mission for his repeated nuclear tests and ballistic missile launches. He said if threatened, the United States would “totally destroy” North Korea.

Kim in recent weeks said the United States would face an “unimaginable strike” from North Korea if provoked.

CIA chief Mike Pompeo said on Thursday that North Korea could be only “months” away from gaining the ability to hit the United States with nuclear weapons.