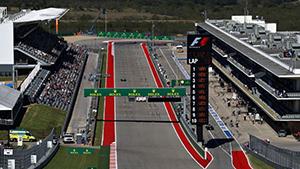 All the key details ahead of the US Grand Prix, including the full weekend race schedule, a track guide and the big-race betting tips from our ‘Pit-lane insider’

Formula 1 heads to Texas for the US Grand Prix and Lewis Hamilton will claim his fourth world title if he outscores Sebastian Vettel by 16 points and team-mate Valtteri Bottas by three points, while Mercedes will win their fourth consecutive Constructors’ Championship if they collect 17 more points than Ferrari.

Here, we have everything you need to know ahead of the big race…

You can watch all the sessions of the US GP weekend live on Sky Sports F1 and Channel 4.

Lewis Hamilton will have his first opportunity to clinch the 2017 Drivers’ Championship this weekend in the US Grand Prix and Sky Bet are offering a 7/1 Price Boost that the Briton will clinch his fourth title in Texas.

Should Hamilton claim his sixth success at the Circuit of the Americas he will take the title provided nearest rival Sebastian Vettel finishes sixth or lower – one of an number of scenarios ahead of the race.

Daniel Ricciardo, third last year, is 13/8 to finish on the podium again while Red Bull team-mate Max Verstappen is an 18/1 shot to be fastest qualifier.

Nobody likes to tip an odds-on favourite, but let’s face it, Hamilton could be 1/100 and still good value in the USA. Six starts there and five wins, and he comes into the race having not finished lower than second since the summer break and having won four of the last five races. He’s in red-hot form and although the title will probably have to wait another week, a win in Austin will surely be his.

Nine podiums in the last 12 races for the Aussie, which is more than any other driver and he returns to a track where he’s finished third in two of the last three years. He’s the man to take advantage of any opportunities for a dive down the inside at the end of the long back straight and you can be sure he’ll be giving his all.

Carlos Sainz was the first driver to retire in Japan, in fact he’s crashed out on lap 1 in three of the last 10 races, so who better to take the honours this week, than his replacement at Toro Rosso, his old team mate Daniil ‘The Torpedo’ Kvyat. Nobody likes to see a driver have a bad day really, but the Russian seems to attract trouble like flies to a blue light and it could well be that his return to F1 doesn’t go totally according to plan.