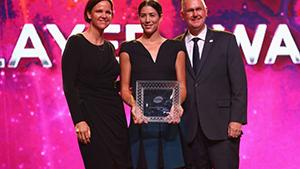 Wimbledon champion Garbine Muguruza has been named player of the year by the Women’s Tennis Association.

The Spaniard was rewarded at a ceremony in Singapore, where Muguruza will aim to cap her season in style at the WTA Finals starting on Sunday.

Muguruza, who beat Venus Williams in the Wimbledon final in July, also had a spell as world number one for the first time following the US Open although she has since ceded first place to Simona Halep.

Latvian Jelena Ostapenko was named the tour’s most improved player after winning the French Open, the WTA announced, while US Open champion Sloane Stephens took comeback player of the year honours after her stunning success at Flushing Meadows.