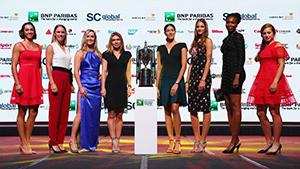 We bring you all you need to know about the 2017 WTA Finals which will take place in Singapore from October 22-29.

WTA Finals: Where, when & TV coverage

The season-ending BNP Paribas WTA Finals Singapore will take place from October 22-29 in Singapore. The matches will be played on an indoor hardcourt at the Singapore Indoor Stadium, part of the city’s sports hub.

The tournament will be televised live in the UK by BT Sport.

The top eight players in the WTA’s season-long ‘Race to Singapore’ rankings qualify for the WTA Finals.

Those players have been drawn into two groups of four with the top two in each progressing to the semi-finals.

Figures in brackets are sets won/lost

Among the big names to miss out are Briton Johanna Konta, Serena Williams, currently recovering from giving birth to her daughter, and Maria Sharapova, whose disrupted season, first due to a drugs ban and then injury, means she has not accrued enough points. Reigning champion Dominika Cibulkova is another who has failed to qualify.

The singles competition sees the eight players compete on a round-robin basis. The players are split into two groups of four with the top two in each group progressing to the knockout semi-finals – the winner of one group plays the runner-up in the other.

If two players have the same number of wins in the group stage, they will be separated via the following methods:

There is also an eight-team doubles competition which is played on a straight knockout basis.

Our tennis tipster Andy Schooler has 9/1 and 7/2 picks for the tournament – he’s assessed all eight players and delivered his verdict in this betting preview.

Meanwhile, the post-draw book of our betting partners Sky Bet had three players as 9/2 co-favourites – Halep, Muguruza and Pliskova.

Halep is favourite to win the Red Group at 13/8 with Muguruza leading the White Group market at 11/8.