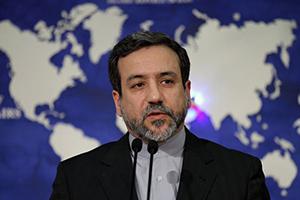 The nuclear deal between Iran and world powers can’t be renegotiated despite U.S. President Donald Trump’s objection to the terms, according to the Middle East country’s deputy foreign minister.

That includes all annexes, clauses and proposed additions, Abbas Araghchi was quoted by the state-owned Islamic Republic News Agency as saying. The U.S. has already violated the accord through actions that undermine its implementation, he said.

“We say clearly and unequivocally, no possibility exists for any negotiations regarding the nuclear deal or its annexes or any additions,” the minister told a conference in Moscow on Saturday.

Araghchi’s comments come ahead of a vote in the U.S. House of Representatives on legislation that toughens sanctions against Iran’s missile program, which wasn’t covered by the 2015 accord.

Trump called Iran a “rogue” state in a speech on Friday and has refused to certify Iran’s compliance with the landmark deal, even as the United Nations’s nuclear watchdog and all other parties maintain it’s abiding by the terms. He also argued that the agreement, reached under predecessor Barack Obama, wasn’t serving national security interests.