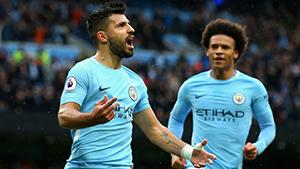 Review, reports and updated odds from Saturday’s action in the Premier League.

Sergio Aguero equalled Manchester City’s all-time scoring record to set Pep Guardiola’s side on their way to a 3-0 win over Burnley.

With Manchester United suffering a surprise 2-1 defeat at Huddersfield, the Blues extended their lead at the top of the Premier League to five points.

Aguero scored a controversial penalty on the half hour to join Eric Brook on 177 goals for the club, with Burnley furious that goalkeeper Nick Pope was adjudged to have brought down Bernardo Silva.

It took until the 73rd minute for Nicolas Otamendi’s goal to make the game safe, with Leroy Sane converting a superb pass from Kevin De Bruyne two minutes later.

Manchester United only had themselves to blame for their first loss to Huddersfield since 1952, with Juan Mata giving the ball away on the halfway line after 28 minutes and Aaron Mooy slotting home the rebound after Tom Ince’s shot was saved.

Worse was to come five minutes later when substitute Victor Lindelof failed to connect with a long clearance and Laurent Depoitre was left to collect the ball and round David de Gea to score.

Marcus Rashford pulled a goal back for Jose Mourinho’s side but the Terriers defied some sustained late pressure for a famous win.

Bournemouth and Leicester fared better on their travels with 2-1 wins at Stoke and Swansea respectively, with Bournemouth 2-0 up after 18 minutes thanks to a superb finish from Andrew Surman and a penalty by Junior Stanislas.

Mame Biram Diouf pulled one back after 63 minutes but Stoke were unable to find an equaliser.

It was a similar story at the Liberty Stadium where an own goal from Federico Fernandez and a tap-in by Shinji Okazaki gave Leicester a two-goal lead in their first game since sacking manager Craig Shakespeare.

Alfie Mawson’s tidy finish from a corner gave the home fans hope but the Foxes held on to claim all three points.

Those results were bad news for Crystal Palace who are now five points adrift at the foot of the table, Roy Hodgson’s side going down to an 86th-minute goal from Mikel Merino in a 1-0 defeat at Newcastle.

A stunning solo goal from Sofiane Boufal secured a 1-0 victory for Southampton at home to West Brom in the last Premier League game of Saturday’s action.

The substitute ran fully 70 yards from inside his own half and left three defenders on their backsides – two of whom had collided with each other – before sliding the ball home for a truly memorable strike.

In the day’s early kick-off, Michy Batshuayi came off the bench to score twice as Chelsea fought back from behind to win 4-2 in a six-goal thriller against Watford.

Pedro’s superb strike had put the home side in front after they were wrongly awarded a corner in the 12th minute, but Abdoulaye Doucoure and Roberto Pereyra scored either side of half time for the visitors.

However, Batshuayi levelled on 71 minutes and Cesar Azpilicueta put Antonio Conte’s side back in front before Batshuayi added his second in stoppage time. 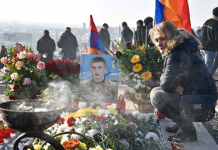