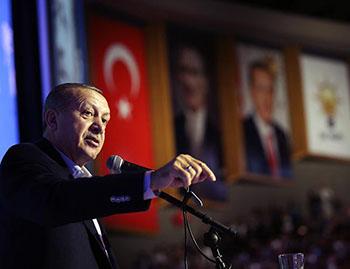 Turkey’s allies should respect the country, President Recep Tayyip Erdoğan has said, adding that Ankara would take any measure to safeguard its security without permission from any country.

“Where there is agitation, where there is harassment targeting us, we can strike one night suddenly,” Erdoğan said on Oct. 22, addressing youth at an event organized by his ruling Justice and Development Party (AKP) in Istanbul.

Turkey would not seek permission in that case, he added.

“We respect those we have strategic partnership with, as long as they respect our laws,” he said.

Although Erdoğan did not name any country in his address, his remarks came amid a row with the United States over a U.S. consulate personnel arrested in Turkey and one day after he slammed Washington for an “undemocratic” indictment made against his security detail.

“If the U.S. issues arrest warrants for my 13 bodyguards in a country where I went upon invitation, I’m sorry, but I will not say that country is civilized,” he said.

He said members of the outlawed Kurdistan Workers’ Party (PKK) and the Gülen network were united in a protest against him within a distance of 40-50 meters from where he was with his bodyguards.

“They [security guards] took measures for us. Two of them [guards] were not even there. Can there be such justice?” Erdoğan added.

He also criticized U.S. President Donald Trump’s policy regarding Muslims, saying Turkey never closed its doors to people who thought differently. “Muslims in the U.S. are facing expulsion so it means there is a problem with the country,” he said.

Erdoğan used harsh rhetoric amid the ongoing diplomatic crisis between the NATO allies. Both Ankara and Washington have cut back issuing visas to each other’s citizens as ties have worsened.

A U.S. grand jury in August indicted 15 Turkish security officials over a brawl between protesters and Erdoğan’s security personnel during the Turkish president’s visit to Washington in May. The president has said the indictment was not binding for Ankara.

The row deepened after Turkish authorities arrested two U.S. consulate staffers, both Turkish nationals. In May, a translator at the consulate in the southern province of Adana was arrested, and two weeks ago a Drug Enforcement Administration (DEA) worker was detained in Istanbul.

Both are accused of links to last year’s failed coup attempt. The U.S. embassy has said the accusations were baseless. Turkey has been angered by what it sees as U.S. reluctance to hand over U.S.-based Fethullah Gülen, who has lived in Pennsylvania since 1999.

U.S. officials have said its courts require sufficient evidence to order his extradition.

Turkey has also been enraged by Washington’s support for the Syrian Kurdish People’s Protection Units (YPG) militia in the fight against the Islamic State of Iraq and the Levant (ISIL). Turkey regards the YPG as an extension of the outlawed Kurdistan Workers’ Party (PKK), hence a terrorist organization.