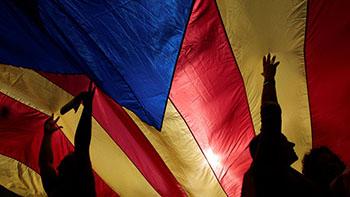 Catalan authorities will not follow orders from Madrid, but will only listen to the will of the Catalan people, Catalonia’s Foreign Affairs spokesman told BBC Radio.

According to the official, EU democracy cannot be trusted if it allows Madrid to impose direct rule on Catalonia.

“How can the European Union live with that situation if it appears?” he said, “How can they be credible if they allow this to happen? Because what I can tell you is that the people and the institutions in Catalonia would not let this… happen.”

In the meantime, Spanish Deputy Prime Minister Soraya Sáenz de Santamaría said that Madrid has not had any contact with the Catalan regional government since Saturday, Reuters reported.

The Spanish government may choose a single representative to temporarily govern Catalonia, she added.

Catalan leader Carles Puigdemont will lose his powers and no longer receive a salary if the Senate approves direct intervention, Santamaría said.

The Senate is expected to approve the measures against Catalonia on Friday, she added.