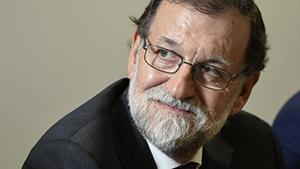 But his message to Catalonia’s devolved government, which spearheads the pro-independence movement, was blunt. He said Madrid would remove its leaders and impose direct rule.

Mariano Rajoy is conservative by party, and in his political style.

He has meandered his way through other crises; a financial one for his country; a corruption scandal that tainted his party. His “keep calm and carry on” strategy worked each time.

But Catalonia today is a completely different ball game.

This Spanish region has enjoyed a high degree of autonomy since the 1980s – only the Basque Country has more.

It’s also important to note that in cultural terms, Catalonia is arguably the most distinct of Spain’s regions.

The Catalan language is widely spoken and from the folkloric dance of Sardana to human towers, there is a long list of cultural traditions here, which enforce the sense of Catalan identity.

And a large part of Catalan society will see Madrid’s planned takeover as an affront to their whole way of life.

The word among the pro-independence camp is that, in the coming weeks, peaceful direct action will be the order of the day.

The Spanish government has outlined a clear strategy, couched within a legal framework.

Advisers close to the prime minister emphasise that the decision to intervene was not taken lightly but they also argue that Mr Rajoy was left with no choice.

At stake, they say, is Spain’s entire system of governance; no other Western government would allow a regional administration to ride roughshod over its constitution and laws.

Catalonia’s independence, or a legitimate vote on the matter, has never been and never will be an option, they exclaim.

But over the next days Mariano Rajoy’s government faces an unfathomably delicate task.

It must now reassert Madrid’s authority in Catalonia.

The practicalities of that won’t be straightforward.

Some within Catalonia’s civil service will be die-hard supporters of independence. Others will simply hate the concept of Madrid being ultimately in charge.

But he admits that his force is in the middle of a “political hurricane.” Over the coming weeks the loyalties of Catalan police will be tested to the absolute limit.

Before we reach that point, the Spanish senate will have to approve Madrid’s proposals. That could take days.

In the meantime, the soon-to-be-sacked Catalan leader Carles Puigdemont will try and convene the regional parliament, before it is stripped of powers.

If that happens, he will probably make a more emphatic declaration of independence.

The vast majority of Spaniards will, in turn, declare that meaningless.

But every twist and turn from now will play into an already febrile political atmosphere.

Every time I speak to a taxi driver or an old lady pushing her shopping trolley down the street, be it in Catalonia or in the neighbouring region of Aragon, people’s views, on both sides, have hardened.

To the naked eye of a tourist, Spain is a country at ease, a country of sun, sea, beautiful buildings and friendly people.

Scratch below and there are deep political divisions.

And in Catalonia the situation is becoming fractured beyond belief.